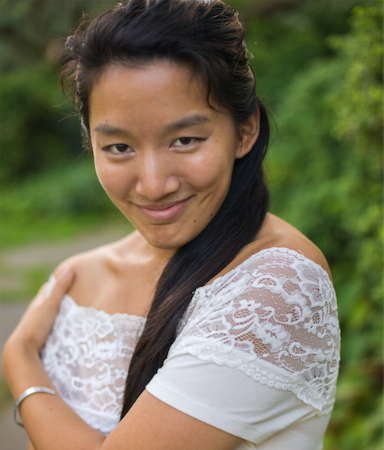 We are excited to feature YA author Andrea Tang and her novel, RENEGADE FLIGHT (Razorbill, March 23, 2021), the futuristic companion novel to her debut book, REBELWING. Enter to win a copy!

Hi, thanks so much for having me on your blog! I'm a novelist who works in international risk consulting and corporate investigations, which is a fancy way of saying that I discovered a way to monetize being a giant liberal arts-slash-international affairs nerd. Said nerd that I am, I also grew up with a huge appetite for science fiction and fantasy, and while the adult side of the genre is also fabulous, I think there's something uniquely rewarding and, well, *fun* about writing SFF for teens. I suspect a lot of it comes down to how formative young adult literature was to my own adolescence -- how timeless yet accessible it felt, and how it really was a gateway to my love of genre fiction in all forms.

Congrats on your upcoming novel, Renegade Flight!  Tell us about the book and what inspired you.

Thank you so much! Renegade Flight is a companion to my debut novel, Rebelwing, set about ~12 years after the original novel, so a lot of its inspiration stems from wanting to continue playing in the sandbox of that world. That said, Renegade Flight is also very much its own standalone story. It takes place in a near-future world enmeshed in these wild, technological arms races, and tells the story of Viola Park, an ambitious young woman born into a privileged family that's historically played a major role in the politics and military intrigue of the era -- a certain family which, in fact, returning readers might recognize from the events of Rebelwing!  ;-)

Vi's story essentially begins with an unceremonious fall from grace right as she's set to begin training as a fighter pilot (of mechanical dragons, naturally!) -- a setback which forces her to wrestle with what her family's legacy really means for herself and her personal ambitions. Meanwhile, she's also dealing with a nefarious mystery at the heart of the school, which has its own geopolitical implications. It's part mystery, part school story, and arguably part love story, and I'm really excited to introduce Vi's adventures both to the original fans of Rebelwing, and hopefully to a new audience as well!

Kind of in-between! I think I queried Rebelwing for maybe 2-3 months, and was on submission for a similar-ish length of time? All in all, it was surprisingly smooth sailing. It sold in a two-book deal, so my wonderfully clever editor Julie also played a big role in helping me figure out what I wanted to do for the second book -- whether it would be a direct sequel, a wholly unrelated novel, or a companion story set in the same universe -- and we collectively decided on the third option, which eventually materialized as Renegade Flight.

I have one big secret project that I'm not allowed to discuss in public just yet, but I'm very excited to share it! Outside of that, I'm also playing around in other speculative genres -- while I adore science fiction, my first genre love was actually fantasy, so I've been working on a contemporary fantasy that's been a super fun change of pace for me creatively.

Have fun, and don't worry so much! I firmly believe that you can learn something from each piece of writing you do, regardless of whether or not it gets published. One of my martial arts teachers talks about the value of "flight time," or time spent sparring and grappling on the mat, which makes a surprisingly apt metaphor for drafting and revising -- the more reps you get really working on something, particularly when it's messy or difficult or painful, the more opportunities you have to hone your craft.

I once took up circus arts at a local rig for a few months, partly to spice up the cross-training for my (at the time, somewhat boring, stuck-in-a-rut) martial arts practice, partly to cultivate new and exciting procrastination methods during a particularly gnarly round of book revisions. I wasn't a terribly talented aerialist or acrobat, but I had a lot of fun -- my favorite discipline was the corde lisse, or aerial rope. (It also made me really want to write Nightwing IP, not gonna lie!)

I'm on Twitter @atangwrites! Come hang out with me! :-)