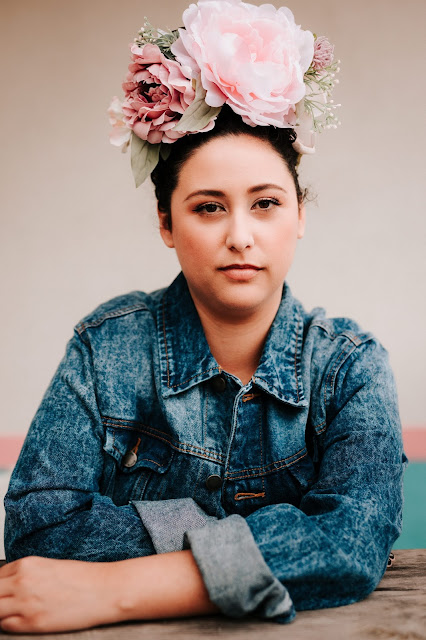 We are pleased to feature author Laekan Zea Kemp and her debut young adult novel, SOMEWHERE BETWEEN BITTER AND SWEET (Little Brown, April 6, 2021).

I’m a twenty-nine-year-old Chicana and mixed-race adoptee and a former ESL teacher living in Central Texas.

I’m not sure who to attribute this to but I’ve heard it said that when we go through something really difficult or traumatic at a young age, that there’s a part of us that stays that age forever.

I think this is true for me and I think it’s the reason I gravitate so much towards YA. My teen years were very difficult and even as an adult, I am still processing the way those events have shaped me and the way they’ve shaped how I see the world. Writing has always been how I process experiences and emotions. I just so happen to prefer writing novels to journaling.

Congrats on your debut young adult book, Somewhere Between Bitter and Sweet (what an amazing title)! Tell us about the book and what inspired it.

My debut novel, Somewhere Between Bitter & Sweet, is a story told in two voices. Pen is an aspiring pastry chef who dreams of continuing her father’s cooking legacy and taking over the family restaurant. However, her parents aren’t big fans of that idea and they aren’t entirely forthcoming about the reason why. All she knows is that the more she tries to assert herself as the rightful successor to her father’s kitchen, the more he seems to push her away, which is really devastating considering that he is the person she looks up to the most.

But Pen’s parents aren’t the only ones who seem to be keeping secrets. Pen has secrets too and when one of those secrets comes to light, it solidifies Pen’s father’s opinion that she doesn’t belong at the restaurant and he actually fires her.

The same day, a new hire shows up. His name is Xander and he’s living undocumented with his Abuelo who he has this really special bond with, though deep down he still really longs for the father he hasn’t seen in years.

So Pen and Xander have a lot in common in terms of craving the approval of the father figures in their lives and from the moment they meet there’s just this deep sense of understanding between them. But besides a romance developing between the two, their lives become even more intertwined when both the restaurant and Xander's immigrant status are threatened, which forces him and Pen to work together to save the place they both call home.

As far as the inspiration, there are so many pieces of me in this story. Pen's mental health struggles mirror the mental health journey I've been on since my late teens and the conflict with her parents comes from those same late teen / early college years when my father was sick, my mother and I weren't getting along and it felt like my entire world was falling apart.

The setting of the restaurant has more joyful origins and was inspired by my partner's hilarious stories of working in a restaurant in our hometown. I loved all of their quirky traditions and inside jokes and I wanted to use that environment to explore this idea of found families and belonging. So there are actually some scenes in the book that happened in real life and some secondary characters that are based on real people.

When it comes to the male protagonist, Xander, he was actually inspired by my former students. I was an ESL teacher and most of my students were immigrants from central and south America, so I’ve gotten to see up close what it’s like for them and their families to navigate our ridiculous immigration system. And yet through it all they are so resilient and so hopeful. I wanted to capture that in Xander’s character.

I’ve wanted to be a writer since I was in middle school. Though I didn’t really know how one might go about pursuing a career like that. I read all of the time but knew nothing about how books were made or even all of the other people involved in the process.

Even when I went to college and decided to major in Creative Writing, I don’t remember being given any information about publishing as a business or even how to get an agent. It was all focused on workshop and the only opportunities for publication that were really discussed were submitting to literary journals and anthologies and things like that.

Commercial fiction had zero presence. It was like it didn’t exist. So it took another, almost ten years after that, for me to learn on my own about the publishing industry and genre fiction and kid lit specifically. But once I’d found the kid lit community, I knew that was where my work belonged.

So it was a long and windy road towards making the decision to pursue traditional publishing. But once I did make that decision, things happened very quickly. I did a 100-page manuscript critique through The Manuscript Academy and used that feedback to do a massive revision. I pitched the book in DVPit a few weeks later. Then a few weeks after that I signed with my agent and month later I had a two-book deal with Little Brown Young Readers!

Did you have a playlist when you wrote this? What is a representative song?

There is actually an original instrumental soundtrack that goes along with the book, which you can read more about here!

There are four tracks, each one focused on a specific character or aspect of the story and the female protagonist’s signature song is currently live and available for listening!

Because my sophomore novel is a companion to Somewhere Between Bitter & Sweet and takes place in the same neighborhood, I’ve actually been listening to the Somewhere Between Bitter & Sweet soundtrack on a loop lately because it takes me right back to Monte Vista and to all of those characters I love. Not to mention it’s gorgeous, a perfect blend between past and present, Cumbia and Electronic, and every time I hit play I just can’t help but dance.

I have a second young adult novel out with Little Brown next year. It’s another dual-point of view romance and actually follows one of the secondary characters from Somewhere Between Bitter & Sweet. It’s all about music and healing and community and courage and it’s just another deeply personal story that I can’t wait to share more about very soon.

I also have some picture book projects in the works that aren’t announced yet, as well as an unannounced middle grade novel that I’m hoping will be the first in a series. It’s about a girl named Omega who comes from a very magical family. They live in a small town in Texas where trees can read minds, cats have way more than nine lives, and the ghosts are more obnoxious than the living.

Each book focuses on a different monster from Mexican and Chicanx folklore and the first book focuses on La Lechuza, who is a witch with the power to transform herself into an owl.

To my younger self: The world is bigger than you can possibly imagine so stop trying to make yourself so small.

To aspiring authors: Read a lot and find a community.

If you’re a young person who’s still in school, talk with your English teacher or librarian about connecting with other students who like to read and write. Maybe you can start a new club or even get a Creative Writing class added to your campus master schedule.

If you’re an adult pursuing publication, especially if you’re a member of a marginalized community, find people who value and understand your identity to help support you on the emotional rollercoaster that is being a professional author.

You can find people through following and interacting with various accounts on Book Twitter, participating in Pitch contests like DVPit, which is how I found my agent, PitMad or LatinxPitch, or applying to mentorship programs like the Hermanas program we offer through the marketing collective I’m a part of, Las Musas.

Because when you’re connecting with people in a meaningful way and developing true genuine friendships with other authors and creatives, it doesn’t take long for the agent signing and book deal to feel more like a consolation prize. Relationships are what really matter and what make the entire journey worthwhile.

People who are meeting me for the first time through my debut novel, Somewhere Between Bitter & Sweet, might be surprised to know that I self-published for many years, mostly in the paranormal romance genre.

I have always written books with Latinx protagonists and chose self-publishing because it was a place where many BIPOC authors were finding an audience since, at the time, finding representation for books with BIPOC characters wasn’t easy. This was before #WeNeedDiverseBooks and #DisruptTexts and the push for more diversity in Kidlit.

So self-publishing was the only home I could find for my books. However, I quickly noticed that it wasn’t just Latinx people who were buying those self-published books, and I realized that if readers of all backgrounds were connecting with and enjoying my work, that the publishing industry was sorely mistaken about there not being an audience for diverse books.

Laekan Zea Kemp is a writer living in Austin, Texas. She has three objectives when it comes to storytelling: to make people laugh, cry, and crave Mexican food. Her work celebrates Chicanx grit, resilience, creativity, and joy while exploring themes of identity and mental health. Her debut novel, SOMEWHERE BETWEEN BITTER & SWEET is forthcoming from Little Brown on April 6th, 2021.