We are excited to feature illustrator Paddy Donnelly and his author-illustrator debut picture book, THE VANISHING LAKE (Yeehoo Press, April 2021). Enter to win a copy! 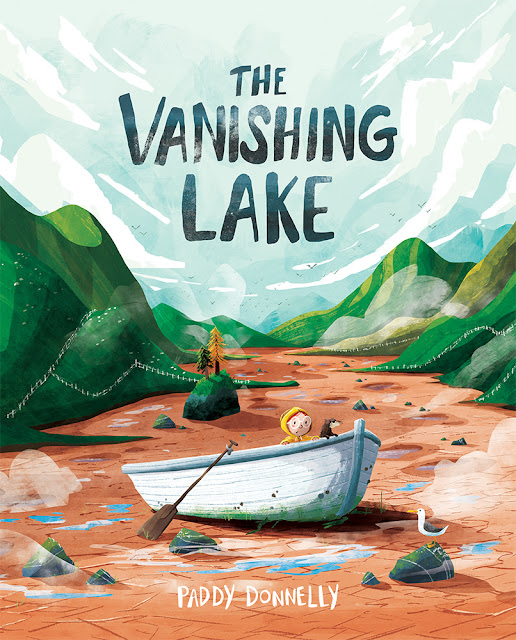 I'm Paddy Donnelly, a picture book illustrator and author, originally from Ireland and now living in Belgium. I've been working as a picture book illustrator for the past three years or so, however The Vanishing Lake is my first as an author and illustrator, so that's very exciting! My background is actually in web and graphic design and after a few years I started to get into illustration. I designed a few iPhone apps for kids and really enjoyed the mix of illustration and design, and that eventually led me into children's publishing.

Congrats on your picture book, The Vanishing Lake! Tell us about it and what inspired you.

Thank you! The story is actually based on a real place, close to where I grew up in Ballycastle in Ireland. It’s a lake called Loughareema which actually does disappear and reappear every few days. Growing up in Ireland, storytelling is an important part of life, so I was surrounded by myths and legends from a young age and I think that’s had a big influence on what stories I like to write about. I've been living in Belgium for a number of years and hadn't thought about the real vanishing lake back in Ireland for a long time.

It popped into my head again as I was coming up with story ideas. I thought the mystery surrounding why it disappears and reappears could be an interesting hook, and then I added a bunch of magical stories into the mix. Having my main character reluctant to believe the stories, made it possible to keep coming back with bigger and wilder ones. The scenery from Ireland definitely had an influence on the look and feel of the textured illustrations.

It's definitely felt like a whirlwind journey so far! I only really got started illustrating children's books in 2018 and it seems crazy to me that I now have 8 picture books out in the world, with a few more on the way. Patience is definitely something that's important to have when working in the publishing industry. The timelines in the publishing industry are so long that you work on something and then don't see it for a year or so until it appears on a bookshelf. That's very different from the tech world where I was working before. For The Vanishing Lake, I think it's been quite a quick journey. I wrote the manuscript in 2018 and it sold to the publisher in 2019. The Chinese language version was released in 2020 and now the English version is being published in 2021. So about three years from the first idea to publication.

I'm working on a variety of picture books and middle grade book covers that'll be coming out over the next year or two. Quite a variety of things really, which is what I like. I prefer to be kept busy and to jump back and forth between different projects. I find I'm able to be a lot more creative when I can change things up quite often. I find it difficult to stick to the same project for weeks or months on end. My most exciting project at the moment would have to be my second author illustrated picture book, Dodos Aren't Extinct, which will be published in Spring 2022.

Do your stories come first in images or words for you? What is your creative process for picture books?

My stories definitely start with images. I have the initial concept or idea for the story first, and sometimes that's actually started from an image I've created, and then I have to try and doodle my way throughout the book until I get a feel for the entire structure. As most picture books have the same number of pages, I know what I have to work with and try to figure out the main beats that need to be in there. I sketch everything out really roughly and then I sit down and start to write the words. Sometimes I'll have done a character study before this to figure out what they look like, but also figure out what their voice is like.

Once I have all of that, then I can really dive into the writing. Then it's a case of jumping back between the words and illustrations as one will influence the other as I work through it. Once the words are in a good place, then I work my way through the coloured illustrations. When working on other authors' stories there isn't the back and forth, but when it's my own story I feel I'm happy to tweak and change the words as I go through the illustrations, even up until the last brushstroke.

You might find a dodo hidden away somewhere in each of my books.

Paddy Donnelly is an Irish illustrator living in Belgium and is represented by The Bright Agency. He has over 15 years experience as an illustrator and designer, and especially loves working with a textured, painterly approach. With a fondness for illustrating the sea and animals, Paddy tries to inject a touch of humour to his work wherever he can. He wishes Pluto was still a planet.