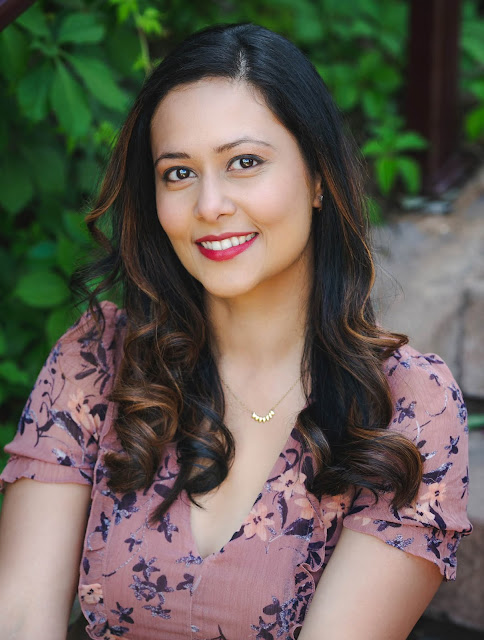 We are excited to feature author Payal Doshi and her debut middle grade novel, REA AND THE BLOOD OF THE NECTAR (Mango and Marigold Press), out June 15. Enter to win a copy!

Thank you so much for having me! I’m Payal Doshi and I’m from India. I was born and raised in the city of Mumbai where I lived until I was 27 years old before moving to the U.S. to pursue my MFA in Creative Writing from The New School, NY. Prior to that I had studied business management, worked in advertising, then magazine publishing, and only after all that did I realize I was happiest when I was writing stories.

I love writing middle grade fantasy books with South Asian protagonists and South Asian inspired settings. My desire to write for children came instinctively. I believe it’s because I was a young middle schooler when I fell in love with reading. As I writer of fantasy fiction, I love that a child’s mind is free of the constraints and boxes that we, as adults, put ourselves and others into. Kids are ready to suspend belief, be taken on adventures, and are eager for new stories, new worlds, and new perspectives. They have that glorious child-like wonder!

Congrats on your debut MG novel, Rea and the Blood of the Nectar! Tell us about it and what inspired you.

Thank you! Rea and the Blood of the Nectar is the story about Rea Chettri, an introverted but curious girl from Darjeeling, India, whose life gets turned on its head on the night of her twelfth birthday. After a fight with her twin brother Rohan, Rea discovers that he has gone missing. Her Amma is distraught and blames Rea for his disappearance. So, Rea along with her neighbor Leela visit the village fortune-teller whose powers of divination set them off on a thrilling quest to find Rohan. They portal into an enchanted realm and travel to Astranthia, a land full of magic and whimsy! There, Rea must battle evil creatures, confront a ruthless villain, and find out why Rohan has been captured. But the heart of this adventure story lies in Rea’s relationships with the people in her life. Her brother who she was once inseparable from is now the popular kid in school and spends most of his time with his friends. Rea, on the other hand, has always struggled socially, but in her mission to find Rohan she must learn to trust others, find the courage within her, and understand the meaning of friendship and family.

I was inspired to write this story because as a kid, I loved to read but I never saw myself in books. A girl like me never got to be the hero, have magic, or save a realm. I wanted to change that. So, I decided to write a fantasy story rooted in Indian culture that had kids from India who went off on thrilling adventures and became heroes! It’s a story I would have loved to read as a kid and one in which I saw myself. Diverse representation, especially South Asian representation, is a mission close to my heart. I believe all kids should see themselves represented in books because each kid should know that they can be the heroes of their own stories. I want South Asian kids to feel seen when they read my book, feel joy and pride for their culture, and know that their stories deserve to be celebrated. At the same time, I wanted to write a story that all kids would enjoy regardless of color, race, nationality, and culture. So, there’s a mystery that needs solving along with an exciting quest, a ticking clock, dark family secrets, unforgettable friendships, a fantastical world, and my favorite, magic!

My road to publication was long and winding! I began querying in November 2018. At first, it was great. Most of my queries turned into full manuscript requests. But by mid-December, the rejections started to come in. One of the criticisms I kept hearing was that my book was too long for middle grade. Typically, the word count for middle grade novels is between 50,000-70,000 words while mine was 91,000. I was heartbroken. I had a choice to make: continue querying or pull my book out, edit it down by 20,000 words, and then give it another shot. If I chose to edit the book, I would have to significantly rewrite parts of it since I had to remove one of three POVs. Adding to the daunting prospect of a massive revision, I was pregnant!

As hard as it seemed, I knew it was the right thing to do. During the last two months of my pregnancy, I cut down 23,000 words and rewrote large sections of the book. Once my baby arrived, I sent the manuscript back to my beta readers to see if the new revisions maintained plot, pace, and character growth. After I emerged from that newborn haze of hormones, sleepless nights, and baby cuddles, I dove back into my beta readers’ feedback and by September 2019, I began querying again. Long story short, I signed with my publisher on January 2nd, 2020! My publishing journey ends with the ever-important lesson: No matter how hard it gets, don’t give up.

My favorite classic MGs are Anne of Green Gables by L.M. Mongomery and the children’s books written by Enid Blyton, namely The Famous Five series and The Magic Faraway Tree. Some recent ones that I’ve really enjoyed are A Wish in the Dark by Christina Soontornvat, and many of my fellow #the21ders debuts. To mention a few: A Place to Hang the Moon by Kate Albus, Clues to the Universe by Christina Li, The Last Shadow Warrior by Sam Subity, The Verdigris Pawn by Alysa Wishingrad, The Gilded Girl by Alyssa Colman, Cece Rios and the Desert of Souls by Kaela Rivera, and Thanks A Lot, Universe by Chad Lucas.

I’m currently working on the sequel to Rea and the Blood of the Nectar which is planned for a Fall 2022 release while plot ideas for two completely different books are gleefully brewing in my mind!

My advice to aspiring authors is to believe that the story they are telling is important and that no matter how hard it gets to keep writing until they reach that final period. First drafts are notoriously hard to write and are meant to be terrible but it’s much easier to mold a fully written story than to keep revising and perfecting what has been written only to have an incomplete manuscript by the end of it.

One thing most people don’t know about me is that I speak four languages: English, Hindi, Gujarati, and Marathi!

Payal Doshi has a Masters in Creative Writing from The New School, New York. Having lived in India, the UK, and US, she noticed a lack of Indian protagonists in global children’s fiction and one day wrote the opening paragraph to what would become Rea and the Blood of the Nectar, her debut middle grade novel. Raised in Mumbai, India, she currently lives with her family in Minneapolis, Minnesota, and can be found daydreaming about fantasy realms to send her characters off into. Learn more at @payaldoshiauthor on Instagram, @payaldwrites on Twitter and on her website www.payaldoshiauthor.com.