We are pleased to feature author Debra Kempf Shumaker and her debut Picture Book, FREAKY, FUNKY FISH: ODD FACTS ABOUT FASCINATING FISH, illustrated by Claire Powell (Running Press Kids)  out May 4, 2021! Pre-order today and enter to win a copy! 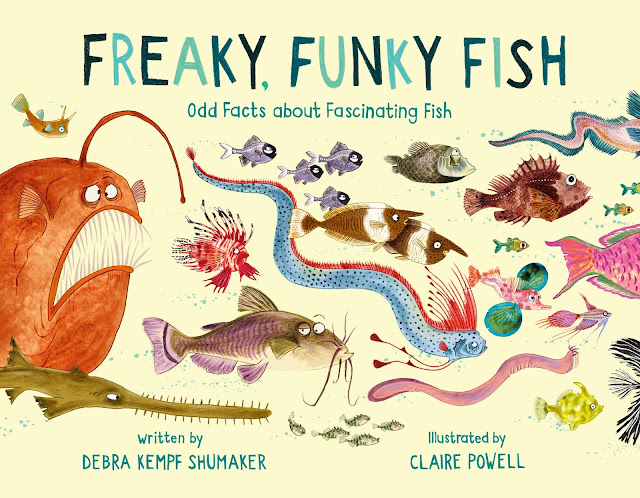 Books have always been a huge part of my life. I grew up on a dairy farm and when cows have to be milked twice a day, vacations don’t happen—so I never traveled as a child. I was also shy and quiet. But books. . . books were my friends. Through books, I could travel anywhere and be anyone. With all of life’s twists and turns, books have been my constant. As an adult, I always had the “someday” dream of writing a novel. But when I had kids, I discovered picture books and soon decided that I wanted to write them instead. Nearly 15 years later, I will finally be a published picture book author!

Congrats on your debut picture book, Freaky, Funky Fish: Odd Facts about Fascinating Fish. Tell us about it and what inspired you.

Freaky, Funky Fish: Odd Facts About Fascinating Fish is a rhyming nonfiction picture book about strange and wonderful ways fish look and act to survive in the waters they live in. The inspiration for this book is actually a mashup of the old and new.

Back in November 2012, I was participating in Tara Lazar’s PiBoIdMo challenge (now StoryStorm) while we were on vacation in Disney. In the aquarium I noticed that lots of fish were named after animals and wrote “fish in a zoo” as my idea for the day. A few months later, for Julie Hedlund’s 12x12 challenge, I wrote a picture book I called Not a Goldfish, which was about a goldfish who imagined he became other animals to thwart the kitty outside his fishbowl. I included back matter about the animal-named fish in the book. That book never sold.

Fast forward to Spring 2018—at the time, I was putting much of my writing energy into writing picture book biographies. After a phone call from my then-agent, I decided to switch gears: nature nonfiction. After reading some incredible rhyming nonfiction about bugs, squirrels, water, rocks, etc. I decided to try to write one myself. While brainstorming about a topic to tackle, I remembered the huge variety of fish I found when I wrote Not a Goldfish!  Voila! Idea born. After doing some research, I wrote the first draft of Freaky, Funky Fish  during Paula Yoo’s NaPiBoWriWee Challenge (National Picture Book Writing Week) the first week of May 2018. And three years later it’s a real book!

Definitely long and winding. I took my first children’s writing course in 2005 when I was pregnant with our third child. We had three boys in 3 1/2 years so I didn’t write much for a few years, and when I did, I focused on children’s magazines and managed to get four articles published. Around 2009, I decided I wanted to focus on picture books and I joined SCBWI. I started getting champagne rejections in 2014 and finally signed with an agent in 2017. We sold Freaky, Funky Fish in January of 2019.

What are some of your favorite classic PBs? Recent ones?

I don’t remember reading picture books as a kid so when I started reading them with my boys in the early 2000s, I just fell in love with them. Goodnight Moon and any Sandra Boynton board book became the treasured books in our house—Barnyard Dance was a definite family favorite. I also remember seasonal Alphabet Acrostic books by Steven Schnur, illustrated by Leslie Evans, that were so stunning and poetic. They really pulled me into the world of children’s lit.

My second picture book, Tell Someone, illustrated by Tristan Yuvienco, comes out on October 1st with Albert Whitman. It’s a completely different type of book than Freaky, Funky Fish and I enjoyed the challenge of writing something in another style. Tell Someone encourages kids to talk about things—both the easy stuff and the hard stuff. Tristan’s illustrations are incredible.

I’m thrilled to say that Peculiar Primates, a companion to Freaky, Funky Fish, is coming out in Fall 2022 with Running Press Kids. Thankfully, Claire Powell signed on to illustrate this one, too. I just saw her sketch for the cover—it will be another super fun book.

I also have a fourth picture book under contract—a lyrical nature PB. It’s not announced yet, but I can’t wait to share more details when I can!

Find critique partners that write in your genre. Outside eyes can contribute so much to your work. In addition, critiquing others’ works will help you grow as a writer, I promise. And don’t pin all your hopes and dreams on one book. Every book you write will help you learn more about the craft, but not every book will sell. It was my 11th polished PB that landed an agent, but my 15th one that finally sold. So don’t ever give up!

I love talking about my big family, so I do think a lot of people know I have eight sisters, which is a fun piece of trivia in itself. But most people probably don’t know how big my extended family is. My mom was from a family of eight and her parents had 45 grandchildren, while my dad and his three siblings gave his parents 21 grandchildren. That’s a lot of first cousins, and growing up, we saw them all on a regular basis. Most still live in the Midwest where I grew up and I miss the opportunities to see them. After this pandemic, I am in desperate need of some big family reunions!

Debra Kempf Shumaker started reading at the age of four and hasn’t stopped since. She grew up on a small dairy farm in Wisconsin but now writes picture books from her home in the suburbs of Northern Virginia. She is the author of FREAKY, FUNKY FISH (May 4, 2021), TELL SOMEONE (October 1, 2021) and PECULIAR PRIMATES (Fall 2022).