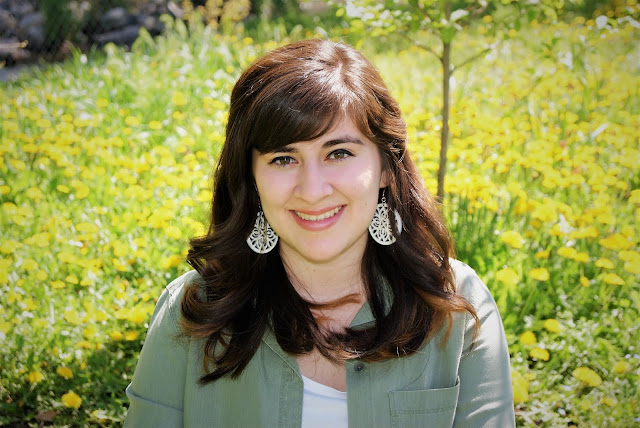 We are excited to feature author Kaela Rivera and her debut middle grade novel, CECE RIOS AND THE DESERT OF SOULS (Harper Collins), out on April 13. Enter to win a copy!

Hey, everyone! So grateful to be here on Kidlit 411. I began writing from a very early age with such hits as Sally the Serpent (my first picture book, written and illustrated by five-year-old me) and typed my first novel at ten years old. I always had an interest in writing, but I found the stories I loved to tell stayed squarely in MG and YA, even once I left my teens.

Congrats on your debut MG novel, Cece Rios and the Desert of Souls! Tell us about it and what inspired you.

Muchos gracias! Cece Rios and the Desert of Souls is the story of twelve-year-old Cece who goes on a mission to rescue her kidnapped older sister, Juana, from the dark criatura (creature) El Sombreron. The only problem is that Cece’s easily considered the weakest, softest person in Tierra del Sol, with a water-like soul instead of the fiery hearts of the rest of her people. And to get Juana back, she’ll have to pretend to be a vicious bruja, capture a criatura, and battle it up the ranks in the tournament-style Bruja Fights. Fortunately, Cece finds an ally—and friend—in Coyote, the Great Namer, who has a soft spot for humans and agrees to help her get her sister back. Cece’s determined to do whatever it takes to overcome her watery soul and get her sister back—but she may just find her soft heart has been strong enough to the impossible all along.

This novel came from a personal mixture of beautiful and painful things going on in my life at the time. The setting, culture, and sense of familia was inspired by the stories my abuelo had told me about growing up in northern Mexico, and my own experience reconnecting with my Mexican heritage. In that way, it was a beautiful and empowering experience, and I hope that vibrant joy comes through in the story.

On the other hand, the themes about inner strength, kindness, and healthy relationships come from difficult experiences I battled at the time. I’ve always used writing as a way to understand things. And Cece’s character particularly ended up being a way to showcase how I believed my mother’s kindness was a strength, despite the people in our life trying to tear her down. I wanted people to see that her immense empathy, and my own desire to treat people well, were powerful strengths in their own right.

In a way, my journey was both. As I mentioned, I’ve been writing novels since I was 10, and I started trying to get published from fourteen on. That means it’s been ten years’ worth of growing as a writer and researching the publishing industry. By the time I hit college, I started to wonder if my life-long dream of getting published was just that—a dream. But I decided that whether or not I got published, I loved to write. So I kept at it for me, if nothing else.

Then, in 2016, I wrote the first draft of Cece Rios and the Desert of Souls. I’d written enough and gotten rejected enough to know that this manuscript was ready. So, toward the end of 2017 (after revising Cece to clean it up), I entered the contest #PitchAmerica where there was an agent showcase, got multiple offers, and then signed with my agent, Serene Hakim, at the end of 2017.

We started submitting Cece halfway through 2018, after some revisions, and it was only six months later that I signed a deal with HarperChildrens. If you look from submission time to getting my first publishing deal, it was a quick and wild ride. But it was only possible because of the many years I’d spent growing my craft, researching the industry, and deciding what I wanted out of the stories I write beforehand. And, you know—the timing being right.

This is a dangerous question to ask any book lover, but I’ll do my best to keep myself brief.

Harry Potter series—I mean, it’s a classic. I reread Prisoner of Azkaban so many times when I was twelve that I nearly had it memorized.

Inside Out and Back Again—I came across this book in college, but it affected me so powerfully, I felt like I was a child again while reading it and soaked the story deep into my bones.

Princess Academy—This was one of the first books I read where the main character loved to learn and used that knowledge to change her people’s lives for the better.

Love, Sugar, Magic series—At my day job, we have a yearly book swap, and one miraculous coworker knows me well enough to have bought me the entire series. I’ve been enjoying every delectable moment!

The Nightmare Thief—A 2021 debut with whimsical magic that turns into a horror novel part way through! I’m excited for more in this series.

Muse Squad—I adored this book from Chantelle Acevedo. It explores how heroic the role of supporting and inspiring people truly is, and it focuses a lot on love and adventure—two things I value deeply. I can’t wait for the sequel!

Out to Get You: 13 Tales of Weirdness and Woe—I read this book by a friend recently, and its toe-curling adventures feel like the Twilight Zone dancing with clever, creepy fever dreams in the best way.

I’m also really excited to finish reading Tristan Strong and pick up While I Was Away, but I’ll try and stop myself here. There are just so many good books to read!

I work on several projects at a time, but I’ll narrow it down to two today.

My first priority is another entry into Cece’s world of Tierra del Sol that I hope sees the light of day (fingers crossed!). My second project is a YA fantasy about flower magic, blood bonds, and a plot to usurp an Aztec-inspired kingdom.

This advice is simple to give but takes years to incorporate: patience.

Things take a long time to come to fruition in the publishing process—so whether you’re trying to finish your first book, waiting to hear back on queries, about to go out on submission, or waiting to hear back on acquisitions, patience will be a great, consoling companion. I like to think of patience as waiting with intention. You know what you’re there for, and you can find meaning, appreciation, and hope in waiting intentionally rather than demanding a result and a time that’s out of your hands.

Patience will also help you create better, period, and allow you to be kinder to yourself as you’re growing in those creative skills. Trust me on this. Patience is one of the kindest things you can do for yourself, and learning to be kind to yourself is an important part of weathering this industry.

I’ve studied various combat arts throughout my life. I trained in Tae Kwon Do as a child, did Mixed Martial Arts in high school, and Capoeira in college. Lately, I’m really into axe-throwing. This may or may not be why you’ll find a lot of fight scenes in Cece Rios and the Desert of Souls.

I’m on Twitter and Instagram! If you want updates on my pub journey, find me on Twitter! If you want to see more behind-the-scenes goodies or check out my story-inspired art, come hang out with me on Instagram. I’ll be excited to see you!

Kaela Rivera believes in the folktales of her Mexican-American and British parents, but she writes about them from the adventure-filled mountains of the Wild West. When she’s not crafting stories, she’s using her English degree from BYU-I as an editor for a marketing company. Her debut novel, Cece Rios and the Desert of Souls, comes out April 13, 2021. Her biggest hope is to highlight and explore the beauty of cultural differences—and how sharing those differences can bring us all closer.