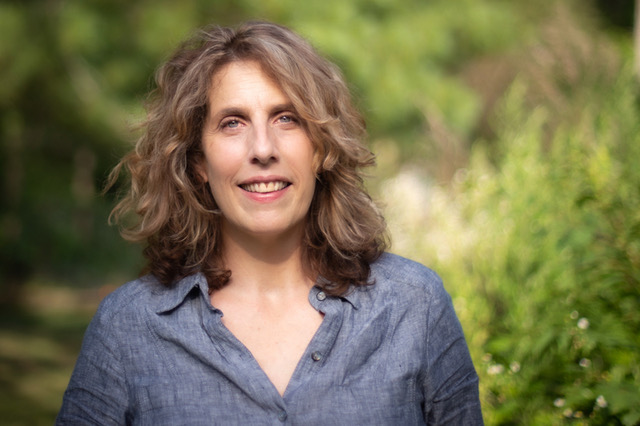 We are thrilled to feature author Alysa Wishingrad and her debut middle grade novel, THE VERDIGRIS PAWN (HarperCollins), coming out July 13! Enter to win a copy!

I began my writing life as a playwright but stopped writing when another career presented itself. Having fun work that paid well allowed me to run away from writing for many years. But writing isn’t something I could avoid for too long. I found my way  back in by way of a cooking show for kids I was pitching with a friend. This is some years ago back when my kids were still quite young. But through the development of this show I began to read more and more middle grade literature – and of course, I was reading with my kids too. The richness of these stories brought me back to that time of my life when books were a lifeline and brought the world of ideas to me. I started writing a story inspired by that cooking show, and . . . I was hooked. I love writing for middle grade readers, they’re just the smartest and most in-tuned people around.

Congrats on your debut middle grade book, The Verdigris Pawn! Tell us about it and what inspired you.

The Verdigris Pawn is the story of Beau, heir to the ruler of the Land, a man so frightening, people only dare call him Himself. Raised isolated and alone, Beau has no idea of the brutal tyranny Himself unleashes upon his subjects, and how hated and feared their family is.

This all changes when he meets Cressi, a young servant, who opens his eyes to the realities of life in the Land – especially about Mastery House, a terrible and brutal place where the children of the poor are sent to be raised and trained to be servants in exchange for payment of their family’s taxes.

This discovery of the truth sets Beau off on an epic adventure along with Nate, a runaway, as he tries to undo the poisoned legacy of his family. But in order to restore fairness and equality to the Land, Beau must think of things like a real-life game of Fist (a board game similar to chess!)

Although, when you’re reviled throughout the Land and false heroes lurk around every corner, leading a rebellion is easier said than done.

The germ of this story was born during a prompt workshop I was taking, but the ideas and themes of equity, truth and power, and that we don’t have to be who the world tells us to be explored here are all ideas very close to my heart.

Oh, it’s been a long and winding road! I spent about four years writing my first novel, a book that I queried but did not get representation for. Interestingly enough that project isn’t quite dead, it might yet see the light of day, although in a new form.

I then spent another three years or so writing the book that became The Verdigris Pawn, and began querying on November 3, 2016 – a scant few days before the 2016 election. Needless to say things got very quiet for a while there. It was not ideal timing to say the least.

But by February of 2017 I signed with Victoria Marini, my fantastic agent. We dove into some need revisions before the book went out. Along the way life got in the way a little bit and so we finally went out on sub in winter of 2018. We got the offer from my editors at Harper in July of that year.

But the road still had some curves. After meeting with my brilliant editors I decided the only way I could address the issues we wanted to tackle was to white page the book. So I chucked the old version and started over from a blank page.

The idea was scary at first, but I am here to say that it turned out to be incredibly liberating and inspiring.

Do not fear the white page! 🙂

I have two books that I’m working on at the moment. Like The Verdigris Pawn, they both take place in quasi-historical settings with fantastical elements. I’m very excited about them both and can’t wait until I can say more about them!

Writing is hard and it asks a lot of you. It demands your honesty, your patience and your humility. Given all that I say be patient with yourself and with your stories. The book will take as long as it needs to—what’s important is that you keep digging, keep listening and keep asking questions to make sure you’re both getting to the heart of the story and telling it as well as you can.

If you’ve met me you might be surprised to know that I’m an introvert masquerading as an extrovert.

You can find me at www.alysawishingrad.com. Or over on Twitter @agwishingrad where I mostly talk about middle grade books. My Instagram is @alysawishingradwrites and there too it’s mostly books, some food and the occasional cameo from my rescue dogs.

Alysa used to have a different career in movies and theater, but nothing could be better than writing stories and spinning magic for middle-grade readers. When she isn't writing she's probably walking the dogs, trying to figure out what to make for dinner, or, if she’s really lucky, seeing as much theater as she possibly can. Alysa lives in NY with her husband, kids, 2 dogs, and 3 cats.