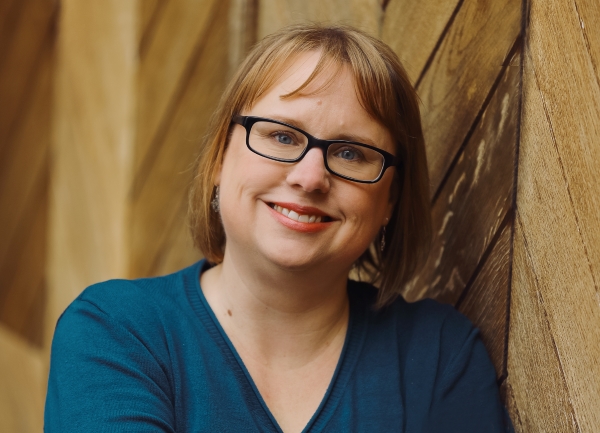 We are excited to feature author Laura Rueckert and her YA novel, A DRAGONBIRD IN THE FERN (Flux, August 3, 2021)

Thank you for having me! I'm originally from Michigan, USA, but I moved to Germany long ago to be with my husband and have lived over half my life here. I was the type of kid who never went anywhere without a book, and I've always loved writing, but I got busy with a career and family after college. Once my kids were no longer toddlers, the writing bug bit me again. I finally managed to write an entire novel, and I haven't stopped since. I've written for adults before, but I always felt like something was't right. I think there's a forever teen in my heart, and that's why I write YA.

Congrats on your YA debut, A Dragonbird in the Fern! Tell us about the story and what inspired you.

Thank you! When an assassin kills Princess Jiara's older sister Scilla, her vengeful ghost torments their loved ones, and the violence won’t stop until the killer is brought to justice. For political reasons, a young, foreign king requests that Jiara take her sister's place as his betrothed. Jiara’s terrified: due to dyslexia and years of scholarly struggles, she believes her chances of learning a new language are slim. But then she discovers evidence that her sister's assassin came from the king's country. Marrying him will allow Jiara to hunt the murderer and save her family from Scilla's bloodthirsty spirit. But it will also make Jiara the killer’s next target.

I had two main inspirations. First, a visit to a German castle where the lady of the house hundreds of years ago had been from France and hadn't spoke German. The castle was out in the country and I wondered how she dealt with it. Second, we live in Germany and my children have dyslexia. Some people (who were not experts) suggested I stop speaking English to them because they thought two languages might be too confusing. But I researched and found a lot of people who have dyslexia are multilingual.

Very long and winding! I loved writing as a kid and teen but ended up stopping after college to concentrate on a career with stable pay and my family. I finally started up again when my kids were no longer toddlers, but then it took about ten years of polishing my craft and finally having the right story at the right time before my debut sold.

Several of my manuscripts have had playlists for inspiration, but not this one. I tend to work best when it's quiet, but I listened to the Vikings soundtrack when I needed to drown out my family. :P

I'm currently working on a speculative alternate history set in 1980s West Germany (so much retro fun!), drafting a new YA fantasy, and trying not to get sidetracked by a very nebulous idea for another YA fantasy.

I think my advice would be the same for me and for other writers. I'd say that it's never too late to start or re-start. Write what you want to write, but it might come down to having the right idea at the right time, so keep writing new books if the first ones don't sell. Learning to give and accept critiques will make your writing stronger. Find writerly friends. And read, read, read!

I think a lot of people might guess that because I moved to another country, I must be fearless. Or since I write books, I'm a creative, artist type. I'm actually a planner who likes excel sheets and security (see building a stable day job from question 3). I do take risks, but they are calculated.

Laura Rueckert is a card-carrying bookworm who manages projects by day. At night, fueled by European chocolate, she transforms into a writer of young adult science fiction and fantasy novels. Laura grew up in Michigan, USA, but a whirlwind romance after college brought her to Europe. Today, she lives in Germany with her husband, two kids, and one fluffy dog. Her debut novel A DRAGONBIRD IN THE FERN, a YA Fantasy, will be available August 3, 2021 from Flux.