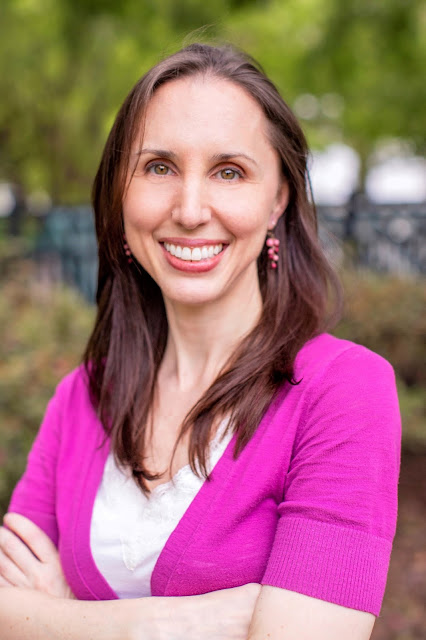 We are excited to feature author Christyne Morrell and her debut middle-grade novel, KINGDOM OF SECRETS (Delacorte Press (August 3, 2021) Enter to win a signed hardcover copy!

Thank you so much for having me! I’ve always wanted to be a writer, but it took me a long time to get where I am today. After graduating college with an English degree, I took the practical route and applied my reading and writing skills to the study of law. I’d been happily practicing corporate law for years when my daughter was born. At bedtime, my husband and I would read to her from our favorite middle-grade books, and listening to those stories - the same ones that had inspired me when I was a kid - rekindled my love for writing. I started drafting those early stories just for fun, to give to my daughter when she got older. Sitting in the dark nursery, I’d type them out in the Notes app on my phone while I rocked her to sleep. But eventually I realized that writing was more than a hobby, and it wasn’t going away. I’m still a lawyer, but now I carve out space in my life to be a writer, too.

Congrats on your debut, Kingdom of Secrets! Tell us about the story and what inspired you.

Kingdom of Secrets is the story of Prismena, whose father is the hot-air balloonist in the peaceful kingdom of Oren. She assists him by mending torn balloons, but she yearns to build and fly the complicated machines herself. One day, a waif named Abi steals Prissy’s only remaining memento of her deceased mother - a silk scarf - and promises to return it only if Prissy smuggles a mysterious box onto one of her father’s flights. Since balloon travel is strictly regulated in Oren, that single act of rebellion results in her father’s arrest and kicks off a spiraling series of events that will yank Prissy out of her predictable life.

Along the way to free her father from jail, she’ll get caught up in a bar fight, nabbed by a sadistic schoolmistress, tossed into a home for unwanted children, and thrust into the center of a brewing rebellion. On her journey through Oren - with its glitzy neighborhoods and its seedy underbelly - Prismena will uncover secrets that change the way she views her family, her kingdom, herself, and even her beloved hot-air balloons. She’ll have to break a few rules - and even forge metal - to save the people she loves, but she may also get a chance to soar.

The story was inspired by a random piece of history. Many people don’t know this (I didn’t!), but during the Civil War, there was a branch of the Union Army called the Balloon Corps that spied on the Confederate Army using hot-air balloons. I was compelled by the juxtaposition of lovely, colorful hot-air balloons drifting over a battle scene. I filed the image away, but I kept returning to it again and again. It wasn’t until years later that the idea evolved into KINGDOM OF SECRETS.

Something in between, though it felt quite long at the time! It took me five years to get my first agent. During that time, I wrote four different middle-grade manuscripts and numerous picture book manuscripts. I’ve never taken the time to count my rejections, but it’s definitely somewhere in the triple digits! Once I signed with an agent, KINGDOM OF SECRETS was on submission for eight months before we received an offer.

What are your favorite classic MGs? How about recent ones?

As a kid, I read every genre, from classic fantasy like The Wizard of Oz and The Chronicles of Narnia, to contemporary books by legends like Judy Blume, Beverly Cleary, and Lois Lowery.

These days, I love The Girl Who Drank the Moon by Kelly Barnhill, Sweep: The Story of a Girl and Her Monster by Jonathan Auxier, and absolutely everything by Lauren Wolk. This past year, I’ve also had the opportunity to read many of the fantastic books by my fellow debuts. A few of my favorites are The Last Windwitch by Jennifer Adams, The Last Shadow Warrior by Sam Subity, and A Place to Hang the Moon by Kate Albus. (This is NOT an exclusive list; check out the21ders.com for more!)

I just finished copyedits on my second book, TREX, which comes out next summer 2022. It’s the story of Trex, a boy who received an experimental brain implant with an unusual side effect: now he shocks everything he touches, and his electrical charge is growing more powerful by the day. When rumors emerge about a prowler sneaking around his neighborhood, Trex teams up with Mellie “the Mouse,” a reclusive classmate training to be a spy, to catch the culprit. As a grudging friendship develops between them, Trex and Mellie find themselves pitted against school bullies, their own parents, and even an evil, brain-hacking corporation. Along the way, they’ll question what it means to be “normal” and explore the fine line between secrets and lies.

I’d tell my younger self and aspiring writers not to wait for the “right” time to follow your dream. If you do, it may never happen. I wasted too many years not writing, waiting for the perfect idea or perfect conditions. These days, I squeeze in writing wherever and whenever I can, even if all I can manage on a given day is jotting down a few paragraphs into my phone between errands. And don’t wait for ideas to come to you. Go out there and actively search for them. On school visits, I tell kids, “You can’t control when lightning will strike. But you can make yourself a lightning rod.”

I’m afraid of heights, and so far, all of my books involve falling in one form or another. I don’t think that’s a coincidence!

The best place to find me online is my website, christynewrites.com. I’ve recently added loads of bonus content related to KINGDOM OF SECRETS, including a book club discussion guide, map of Oren, and much more!

Christyne Morrell is a children’s book author and attorney. She lives in Decatur, Georgia with her husband, daughter, and pampered beagle. Christyne has been writing poems and stories since she could hold a pencil, but KINGDOM OF SECRETS (Delacorte 2021) is her debut middle-grade novel. Her second novel, TREX, will be released in Summer 2022.

Christyne is also the author of the picture book Abra, Cadabra & Bob (Clear Fork Publishing 2019), and her work has appeared in Highlights, Spider, and The School Magazine. She can be found online at christynewrites.com and on Twitter and Instagram at @ChristyneWrites. Christyne is represented by Danielle Chiotti at Upstart Crow Literary.