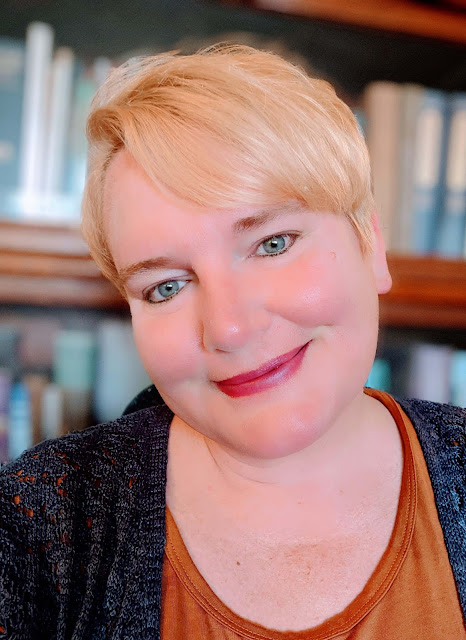 We are excited to feature author Ginny Sain and her debut young adult novel, DARK AND SHALLOW LIES (Razorbill/Penguin), out on Sept. 7. Enter to win a copy (to be mailed out in September)!

I come from a family of writers. My mother has 20 traditionally published novels, mostly middle grade historical fiction, and my father was a poet and non-fiction writer. Even my brother is a past Poet Laureate for the state of Oklahoma! So writing is in my DNA. I actually didn’t start out as a writer, though. The theatre has always been my true love. My degree is in theatre and I’ve spent my whole adult life, up until now, working in the theatre. I only started writing when I moved back to Oklahoma. I needed some new direction, and my mother convinced me to become involved in SCBWI. Because I had spent years working with teens in the theatre, and I loved that age group so much, I knew they were the group I wanted to write for and about.

Congrats on your YA debut, Dark and Shallow Lies! Tell us about the story and what inspired you.

I am so in love with this story, mostly because the setting is so close to my heart. Dark and Shallow Lies is set in the bayous of far south Louisiana, way down south of New Orleans. Most people don’t even know there is anything south of New Orleans, but there is! The book started out with a question...How do you keep a secret in a town full of psychics? It’s the story of a girl who returns home to her small bayou town, which happens to be the”Psychic Capital of the World”, to try and figure out what’s happened to her missing best friend. Along the way, she becomes entangled with a mysterious boy, discovers a psychic ability of her own that she never had before and never wanted, and learns way more than she bargained for about the town’s bloody past. So it’s a very dark and twisty mystery/thriller type book.

La Cachette itself is not a real place, of course, but the town was very loosely inspired by two actual places. The first is the tiny town of Cassadaga, Florida, which I was lucky enough to stumble upon  during a road trip across the sunshine state. Cassadaga really does bill itself as the “Psychic Capital of the World.” However, Cassadaga was a bit too accessible for what I had in mind. I needed a place that was more cut-off from the world. Somewhere a little harder to get to...and to escape from. I had spent a lot of time in Louisiana over the years and had fallen so deeply in love with the swampy landscapes, the culture, and the people, and my mind went back to a little place called Pilottstown, which served for years as a home to riverboat pilots on the Mississippi River, so that became the inspiration for the geographical location.

Hmmmm. I’m going to say something in between. I did write two novels before this one, and although I got a lot of good feedback and lots of full requests for those manuscripts, they just weren’t quite ready. Once I wrote Dark and Shallow Lies, though, things went pretty fast. I finished the first draft in about six months, and it was only another couple of months before I got an offer of rep from an agent. I had the full out with several agents by that point, so I let them all know I had an offer, and I was lucky enough to end up with several offers. I was able to pick an agent I’d always wanted to work with, and the rest happened really fast. I signed with my agent in July, did one very quick and minor revision, went out on sub, and sold the book at auction a week later. That was fall of 2020, so when it comes out in August 2021, it will have been about ten months from auction to release. So very fast! It’s been kind of a whirlwind, in the most awesome way.

I don’t have a playlist. I’m one of those weirdos that needs quiet to write, so I don’t listen to music while I’m actually working. But I do have a couple of songs that I used to help me find the right mood when I needed it. The first is a song called “Hurricane” by The Band of Heathens. I don’t really know any of their other work, but I stumbled across that song and it wa so cool. The second is “Franklin” by Paramore. That one is all about the weirdness of going home to your old hometown after the whole world has changed, and I’ve always loved Paramore, so that song just sort of spoke to a lot of things going in the book.

I had a two-book contract, so I’m working on book two, which should be out in the fall of 2022. I can’t say a lot about it, but it is also a YA mystery/thriller with some magical/paranormal elements. Think waves, lighthouses, salt in the air. It’s actually set in the world of the theatre, so I’m excited to bring my love of theatre and my love of writing together for this project!

That’s a hard one. I think actually my advice to my younger self and my advice to aspiring writers would be the same. I think I’d say, don’t be afraid to screw things up. By that I mean, don’t be afraid to experiment, try new things, stretch outside of your comfort zone, and do the things that scare you. If it ends in disaster….so what? At least you tried something new. That’s always been hard for me, because I’m kind of a perfectionist. I like to get things right the first time, But, when it comes to art, that really holds you back. It means you never create anything that truly challenges you.

I am obsessed with alligators! Okay...my friends know that. And my Instagram followers know that. But maybe most people don’t. It all started back in college when my then boyfriend took me down to Louisiana to meet his family. He was Cajun, and I just fell so in love with that whole area. The food, the music, the amazing people. But, as a girl from the dry and dusty plains of Oklahoma, I was especially fascinated by the alligators. There’s just something so prehistoric about these animals that have remained basically unchanged for millions of years. They’re like actual living dinosaurs! So, the thing with the boy didn’t work out, but the alligator love stayed. Now I spend as much time as I can in Louisiana and Florida, and it’s partly because I just love those gators!

Ginny Myers Sain is the author of DARK AND SHALLOW LIES, her debut YA novel available 9-7-21 from Razorbill/Penguin. Although she comes from a long line of writers, her first love has always been the theatre. She has a degree in theatre and has spent most of her career teaching acting and directing plays and musicals. Ginny currently lives in Tulsa, Oklahoma, with her teenage son and a very cowardly doberman named Shipley. When she is not working in the theatre or writing, you're likely to find her listening to true crime podcasts, taking pictures of alligators, eating tacos, or planning a trip to Walt Disney World.