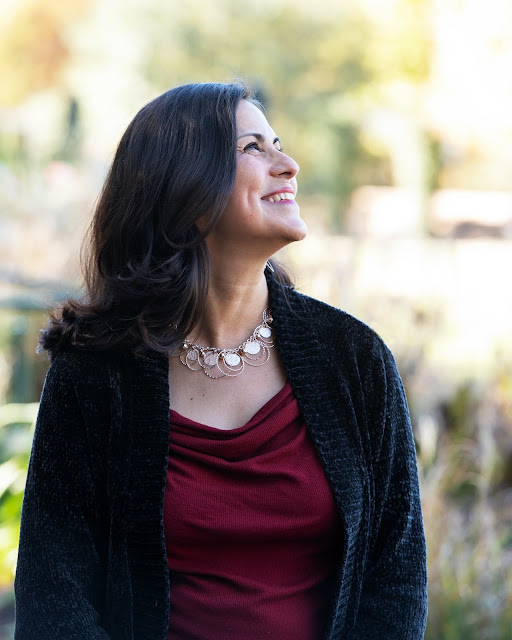 We are excited to feature author Alda P. Dobbs and her middle grade debut, BAREFOOT DREAMS OF PETRA LUNA (Sourcebooks for Young Readers), out on Sept. 14! Enter to win a copy!

English was my second language and it took years for me to learn it. Due to my frustrations with it, I rebelled against English and became a reluctant reader. It wasn’t until one late evening in high school, during a bus ride that I found a copy of J.D. Salinger’s Catcher in the Rye. The book forever changed me and the way I saw English. It ignited an urge to tell my own stories. I started college and was crushed when I was placed in remedial English. I took action and signed up for courses like Latin and German, which vastly helped improve my English. My confidence, though, took longer to acquire. I pursued a career in physics and engineering but all the while, my urge for storytelling lived strong in me. In 2010, I moved to Italy and being surrounded by so much inspiration, I found the courage to pursue my dream of writing.

Congrats on your debut middle grade novel book, Barefoot Dreams of Petra Luna! Tell us about the book and what inspired you.

Thank you! Growing up I loved listening to stories about my great-grandmother’s experience during the Mexican Revolution. They all told of extraordinary events and unbelievable trials she endured as a child. One story in particular intrigued me. It was of my great-grandmother and her family anxiously waiting for the US border to open along with thousands of other people so that they could reach safety. I decided to do some research to find out if it was true. Without having an exact date, I searched through old newspapers and after a few months, I found an article that described the event exactly as my great-grandmother had recounted it. I knew then I had to share her story with everyone, and Petra Luna was born!

Great question since every journey is so different for everyone. I’d say it’s been long and winding with some very sweet spots here and there. For the first three years, I read tons of books and worked on a children’s anthropomorphic novel that agents/editors didn’t quite get, although, in reality, I was still learning to write. My story never went into submission, but since it didn’t attract agents at conferences, I began writing magazine articles.

It was a HUGE confidence boost when I got published in for Highlights Magazine. The idea of Petra Luna came to me in 2013, and the story began as a children’s magazine article, then morphed into a picture book. A year later, during a writing conference, an agent suggested I turn my picture book into a novel. It then took another five years to complete Barefoot Dreams of Petra Luna.

I love The Bridge to Terabithia by Katherine Patterson, Avi’s Crispin series and Lois Lowry’s Number the Stars. Recent ones – that’s a tough one. I’d have to say A Wolf Called Wander by Rosanne Parry and The Girl Who Drank the Moon by Kelly Barnhill.

I’m currently working on the translation of Barefoot Dreams of Petra Luna to Spanish and its follow-up book! Book 2 follows Petra and her family to a refugee camp in Eagles Pass, Texas and the to San Antonio along with 30,000 other refugees who settled there.

I’d say to be patient with yourself. Understand that writing takes time to learn, and the publishing business is not a swift one. Hang in there. But also keep in mind that once the contract is signed, things move VERY fast.

I didn’t start talking until I was 4 years old!

My website is www.aldapdobbs.com and my Instagram handle is @aldapdobbs. For Facebook I use Alda P. Dobbs. I also offer a quarterly newsletter where I give writing/publishing advice, share my favorite kit lit books as well as behind the scenes of my work.

Alda P. Dobbs is the author of the upcoming novel Barefoot Dreams of Petra Luna. She was born in a small town in northern Mexico but moved to San Antonio, Texas as a child. Alda studied physics and worked as an engineer before pursuing her love of storytelling. She’s as passionate about connecting children to their past, their communities, different cultures and nature as she is about writing. Alda lives with her husband and two children outside Houston, Texas.