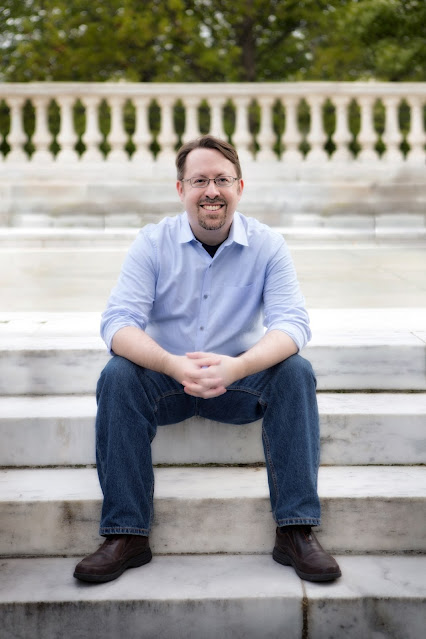 We are pleased to feature author Jason R. Lady and his recent middle grade novels, MONSTER PROBLEMS and SUPER PROBLEMS (Black Rose Writing 2019, 2020). Enter to win a copy of both! 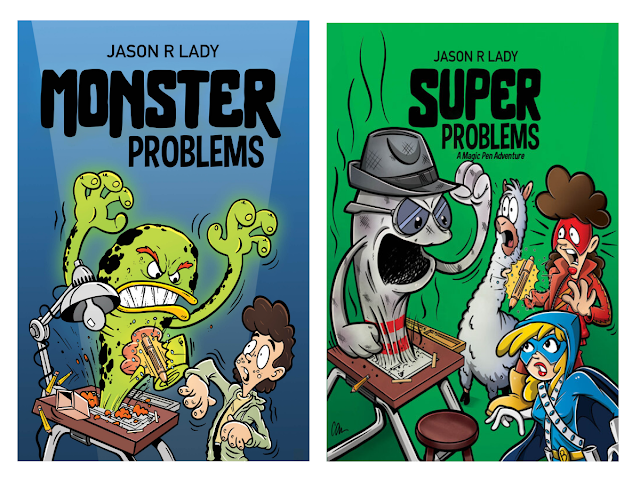 I write middle grade fantasy adventure novels. I live in Cleveland, Ohio with my wife and for a day job I work in Human Resources. I’m an Army brat and my family moved around a lot growing up, living on different military bases in Germany and Fort Knox, Kentucky. My parents were big readers and encouraged me to read, too.

From an early age, I was into science fiction and fantasy, comic strips and comic books. I first started writing my own stories in elementary school. Every new place I’d move to, I’d draw my new friends as superheroes, and we’d star in my own superhero adventures. In high school, I grew impatient with drawing my stories (because you had to illustrate everything that was happening as well as write dialogue and make a plot), so I switched to writing fiction novels in giant spiral-bound notebooks. One in particular was a Robin Hood parody that starred all my high school friends. The notebooks got passed around at lunch and on the bus, and I saw first-hand the power of stories to bring people together. It also got me used to, early on, having my work read by others, so not a lot of nervousness there.

I minored in creative writing in college, and afterward had my sights set on writing sci-fi and fantasy adventure for adults. I tried a few drafts, but nothing seemed to click. My wife noticed how well I got along with middle schoolers, and encouraged me to try writing for that age group. That age group is so much fun to write for. Middle grade kids still appreciate silly humor and wacky antics, but also appreciate a more complex plot and character development. For me as a writer, it’s the best of all worlds.

Congrats on your recent middle grade novels, Monster Problems and Super Problems. Tell us about them and what inspired you.

Monster Problems and Super Problems are part of a series called The Magic Pen Adventures. In each book, a middle schooler gets a magic pen that makes everything they draw become real.

Super Problems is about a different sixth grader who draws himself and his friends as superheroes. Then it becomes real, and they have to learn how to use their powers, work together as a team, and protect an obnoxious alpaca whose magic wool is wanted by the villain, an evil and sentient stinky sock. A few side characters, and the magic pen itself, carry over from book to book, but the main characters are different in each book.

Each kid who gets the magic pen is grappling with a dilemma and in the process of creating things with the pen and dealing with the zaniness and adventure that comes next, they’re able to eventually resolve their dilemma and learn a little bit about themselves. The tone of both books is largely fun and humorous. These books are based on my own experiences as a middle school kid. I never had a magic pen, of course, but like Brad, the main character in Monster Problems, I got in trouble for drawing in class instead of paying attention and got grounded from drawing. Similarly, I was like Scott, the main character in Super Problems, in that I was many times the “new kid in town” and drew my friends as superheroes to help us all bond. The group of friends in Super Problems are based on my best friends from 7th-9th grade. I put a lot of myself into these characters: creative types who sometimes have our heads in the clouds as our imaginations run away with us. I think it helps to bake some of that authentic middle school experience into the stories.

My road to publication was definitely long and winding! I wrote Monster Problems in 2007 and it didn’t get published until 2019! In between there were lots and lots of queries to publishers and lots of rejections. I didn’t keep count, but I think the number of rejections is in the hundreds. The important thing was, I didn’t stop. Sure, to avoid burnout I’d take time off from it here and there, but I kept going. That’s my advice to anyone who wants to get a book published: don’t give up. Foster a support system of family, friends, and fellow writers to encourage you. Ignore the naysayers. Keep believing in your work. You only need one publisher to say yes!

My favorite classic MGs include anything by Judy Blume, like Superfudge and Tales of a Fourth Grade Nothing. Three series I absolutely devoured—every time my school library had another volume I snapped them up—were the Ramona books by Beverly Cleary and the Encyclopedia Brown books by Donald J. Sobel. I also loved the Three Investigators series, which is very underrated and seems to have faded into obscurity, which is a shame because they’re kind of like the Hardy Boys but it’s a group of middle grade kids who solve mysteries, with their own HQ, business cards, chauffer, everything! If you’re that age, you could aspire to be like the Three Investigators. The Hardy Boys were older and harder to relate to if you’re in middle school.

Recent MGs I’ve enjoyed are The Super Life of Ben Braver by Marcus Emerson and Mrs. Smith’s Spy School for Girls by Beth McMullen. Both are great adventure series but with lots of zaniness and humor. Very similar in tone to my books. Of course, for an adventure series, Percy Jackson and the Olympians is fantastic, and you learn a lot about Greek mythology, too!

I’m working on the third book in The Magic Pen Adventures series! Same magic pen, different middle schooler, different dilemma, different crazy adventure! I also have a science fiction adventure series in the works and a few other ideas I’m kicking around in the back of my head. Even when I’m actively working on a project, the wheels are turning with other ideas.

It’s tough to know what advice I’d give my younger self. Maybe to start writing middle grade books earlier? But I think we learn a lot from trying things and seeing them not work out. Part of being a writer is discovery. Discovering what process works for you. Are you someone who methodically plots out the entire story before writing it, or do is it better for you to dive in and discover it as you go? Do you write every day, or once a week, or every few months? What genre do you want to write, and for what age group? It’s all part of the journey and the learning process. There’s no “correct” way to do it all, every writer must learn what’s best for them.

I have metal plates and bolts inside my face! In 12th grade I had jaw surgery to correct an orthodontic problem, so my jaw was broken and re-set. Of course, I was unconscious when they did it! The metal isn’t enough to set off metal detectors, but it does create quite a stir when I get x-rays at the dentist. The entire dental staff will crowd around to “ooo” and “aaah” at the x-rays!

My website is www.jasonrlady.com and I’m on Instagram as JasonRLadyAuthor, Twitter as JasonRLady, and Facebook as JasonRLadyAuthor. At my website you can upload a magic pen picture of your own. Draw a picture as if you had the magic pen and everything you draw will become real. I post the pictures on my social media to promote imagination and creativity!

Jason is an army brat who grew up moving around a total of seven times on military bases from Germany to Fort Knox, Kentucky. From a family of avid readers, Jason was encouraged to read fantasy and science fiction, and write his own stories and comic strips from an early age. Jason wrote his first novel-length story in high school--a parody of Robin Hood that starred all his friends and got passed around on the bus and read on the way to cross-country races. When he's not writing, Jason works in Human Resources. He is a member of the Society of Children’s Book Writers and Illustrators. In his free time, Jason can be found talking about and enjoying 1980’s music and popular culture, working on visiting all the MLB baseball stadiums, and following the Cleveland Indians. He lives in Cleveland, Ohio with his wife and many great friends. Jason has published two books in the Magic Pen Adventures series from Black Rose Writing. The first book, Monster Problems, was accepted to the Ohioana and Kentucky Book Festivals. The second book, Super Problems, is certified IndieReader approved and a Maxy Awards finalist. He is currently at work on the third novel in the series.