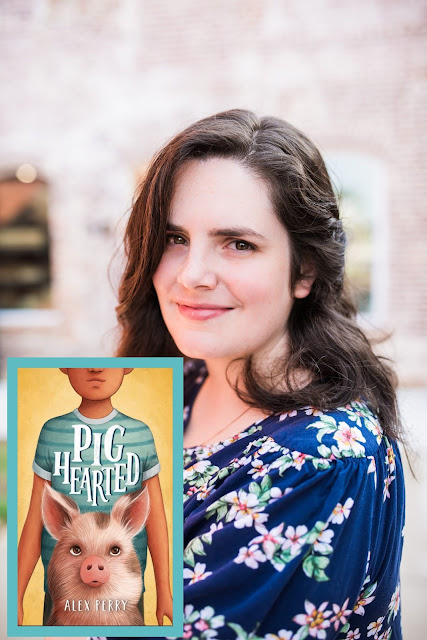 We are excited to feature author Alex Perry and her debut middle grade novel, PIG HEARTED (Little Brown Books for Young Readers), out on Oct. 26, 2021! Enter to win a copy! 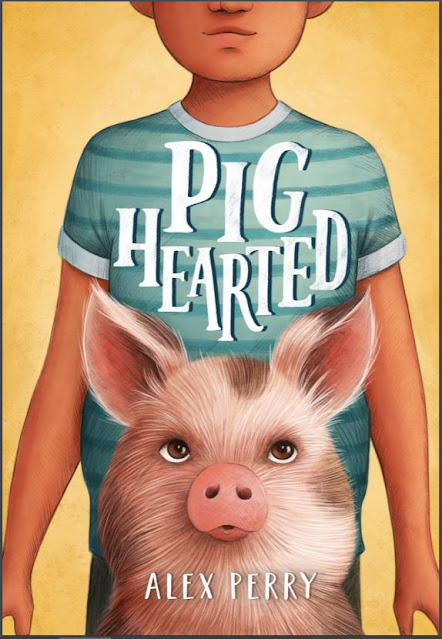 I grew up in Texas, Germany and Massachusetts, so books were the friends I could fit in my suitcase. By first grade I was “publishing” my own stapled-together picture books. Then, my third-grade teacher had us write a play based on Charlotte’s Web. Something about Wilbur stuck with me for years. This pig knows what might happen to him, and he’s terrified. When we performed the play, I was cast in my ideal role: the goose. She’s a know-it-all that talks too fast, so it was perfect for me.

I taught sixth grade after college and got to deepen my respect for middle schoolers. They’re brilliant and emotionally complex and make for perfect protagonists. After I stopped teaching, I wanted to continue to do something involving childhood literacy. I decided to take a risk and try to make my first dream come true. Now that’s finally happening.

Congrats on your debut middle grade novel, Pighearted! Tell us about it and what inspired you.

I heard a story on NPR about a scientist that was trying to create perfect donor organs for transplantation. He wanted to do that by combining pig and human DNA so that the resulting chimera would essentially be a pig with some human organs. I kept wondering what would happen if those creatures didn’t just have human hearts and kidneys. What if they had a human brain? What would that life be like?

That idea combined with my long-standing love of Charlotte’s Web. Like Wilbur, J6 the human/pig chimera knows his fate and struggles to avert it. At the same time, he’s like Charlotte in that he’s also trying desperately to save the human boy in need of his organs. I felt for this creature immediately and knew that I had to tell his story.

It is probably around the middle of the road. I started writing Pighearted near the beginning of 2017. By April of 2019 I had my agent, Melissa Nasson, and by October 2019 Pighearted sold! I guess that’s a short and winding journey? There were plenty of rejections along the way and lots of heavy revision work. The book that’s coming out in October is nothing like that first draft.

Obviously, Charlotte’s Web is up there. It combined my love of writing with my love of pigs. I’m also inspired by the characters in the Junie B. Jones and Diary of a Wimpy Kid series. I adore any character that lacks self-awareness, and Junie and Greg are the masters of not understanding what they’re doing.

Holes is an example of an almost perfectly constructed novel, and I’ll read anything by Katherine Applegate, Erin Entrada Kelly, or Lynda Mullay Hunt. There are so many more, but I’ll leave it at that.

I’m working on a story about two younger sisters with nothing in common, until both of their older sisters go missing.

I’d tell myself to look for happiness and opportunities to enjoy life. Don’t get so bogged down in work.

Am I a hypocrite if I’d tell aspiring authors the opposite? Keep working on that draft you have languishing on your computer. It may seem terrible now, but don’t give up on it. You might be able to turn it into something great. If it’s unsalvageable move on to the next thing, and keep writing until you have something you’re proud of.

Many people don’t know that I’ve had arthritis since I was ten, and that I’ve loved to roller skate for even longer.

Alex Perry used to teach sixth grade in Houston, but now she writes books for kids everywhere. Pighearted is her debut novel. She lives just outside of Chicago with her husband, daughter, and two huge dogs.