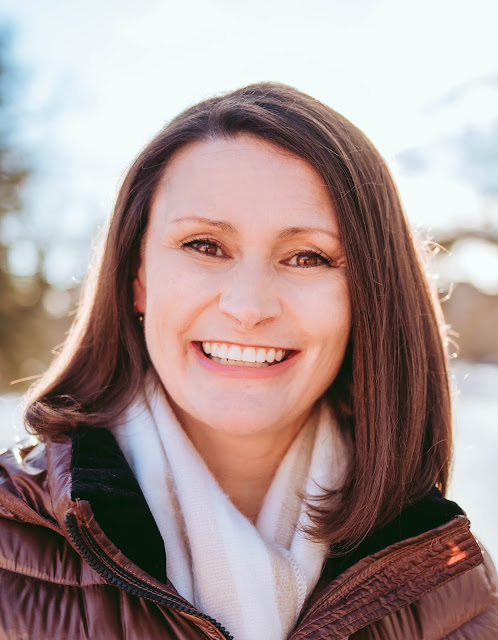 We are excited to feature author Jessica Vitalis and her debut middle grade, THE WOLF'S CURSE ( Greenwillow/HarperCollins, September 21, 2021).

Thanks for having me on Kidlit411! I’m a Columbia MBA-turned writer with a passion for middle-grade literature and a focus on stories that are both entertaining and thought-provoking. My journey to become a children’s author has been long and twisty; I grew up reading and writing but moved away from books as I pursued a career in business.

It wasn’t until my early 30’s that I turned back to literature in a serious way. I decided to try my hand at writing a memoir, but I wrote several picture books, too. I’d joined a critique group to get feedback and every single time I turned in a PB manuscript, they told me it sounded like the first chapter in a middle-grade novel. It had been years (decades?) since I’d read any middle grade, so I dove in and was immediately hooked!

Congrats on your debut middle-grade novel, The Wolf's Curse! Tell us about it and what inspired you.

Thank you! The story is a twist on traditional Grim Reaper mythology and features a 700-year-old invisible Great White Wolf searching for someone to take her job. The only person who can see her is a twelve-year-old boy named Gauge. Unfortunately, Gauge has been accused of being a Voyant, or a witch, by the villagers and has spent most of his life in hiding. When he witnesses the Wolf steal his grandpapá’s soul, he joins forces with another orphan and embarks on a life-changing journey that reveals surprising truths about the Wolf and about Death.

The idea for this story struck me as I was standing in front of my bookshelves searching for inspiration. My gaze landed on a worn copy of Markus Zusak’s The Book Thief. I knew immediately that I wanted to try my hand at writing a book with Death as the narrator; the minute I sat down at my computer, the Wolf’s voice took over the story and never let go!

Definitely the former; I wrote for thirteen years before landing my first book deal. In the early years of my writing journey, I had two young children at home and squeezed in writing and studying craft during naps and after bedtime. It took several years of writing (and three manuscripts) to land my first agent. After that, it took several more years, three more novels, and a second agent to finally land a book deal. Although the process was long and sometimes frustrating, I’m grateful for the way my journey unfolded; I’m a far better writer now than I was earlier, and I’ve met so many amazing and inspirational writers/friends along the way.

My favorite classic is easy: Bridge to Terabithia is gorgeous. My recent favorites are tougher because there are so many stories I love. In general, anything by Tahereh Mafi, Shannon Hale, Erin Entrada Kelly, and Gary D. Schmidt makes the top of my list. Some of my favorite debuts from 2021 include Starfish by Lisa Fipps, A Place to Hang the Moon by Kate Albus, and The Many Meanings of Meilan by Andrea Wang.

I’m working on developmental edits for my second book, coming from Greenwillow/HarperCollins in the fall of 2022. I can’t say too much about the story yet other than that it’s a loose companion to The Wolf’s Curse; it’s set in a neighboring country but has totally different characters and magical rules, and it’s both the exact opposite of The Wolf’s Curse and a perfect complement (which I know doesn’t make any sense now, but will when you read both books)!

The advice I would give to my younger self is the same as I’d give to aspiring writers: keep going. There is so much in this industry that can’t be controlled—the one thing we can all keep doing is working on our craft and writing stories, and the only way to guarantee our failure would be to quit.

On a technical level, I’d encourage my younger self (and all aspiring writers) to figure out what their weakness is and devote their time and energy to improving in that area. For me, character development has always been hard, whereas plot has always come fairly easily––it wasn’t until I learned that plot is just a device that carries characters through an emotional arc that my stories really improved.

Okay, here’s something fun (but super embarrassing): In high school, a traveling theater group held auditions for a musical. My singing was so bad that I was cast in the role of the barking dog!

My website is www.jessicavitalis.com, but I can also be reached on Twitter (jessicavitalis), on IG (jessicavauthor) and on FB (jessicavauthor). I also run a program called Magic in the Middle; subscribers receive free monthly recorded book talks they can share with young readers to introduce them to new middle-grade fantasy books (the sign-up is on my website).

JESSICA VITALIS is a Columbia MBA-wielding writer. She brings her experience growing up in a non-traditional childhood to her stories, exploring themes such as death and grief, domestic violence, and socio-economic disparities. With a mission to write entertaining and thought-provoking literature, she often includes fantastical settings, and she founded Magic in the Middle, a series of free monthly recorded book talks, to help educators introduce young readers to new fantasy books. She was recently named a 2021 Canada Council of the Arts Grant Recipient. An American expat, she now lives in Canada with her husband and two precocious daughters. She loves traveling, sailing and scuba diving, but when she’s at home, she can usually be found reading a book or changing the batteries in her heated socks.