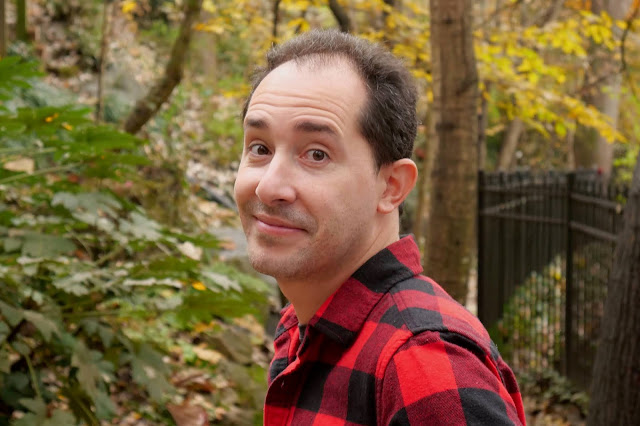 We are excited to feature author Victor Pineiro and his debut middle grade novel, TIME VILLAINS (Sourcebooks), out now. Watch for Book 2, MONSTER PROBLEMS, coming out in July 2022. Enter to win a copy of TIME VILLAINS!

It started after my third grade birthday party. The guests were long gone, the doorbell rang, and standing at the door was my best friend’s mom. She apologized that her gift was late, and handed me The Lion the Witch and the Wardrobe. I lived in Narnia for the next few weeks, then Oz for the next six months, and then kept hopping in and out of fantasy worlds after that. Somewhere in the mid-Narnia books I decided writing books was all I wanted to do.

Of course, life has its own plan. Before becoming a published author I spent some time as a teacher, screenwriter, documentary filmmaker, copywriter and game designer. Seven years ago I decided I couldn’t keep postponing my dream, so I got very disciplined (which is extremely unlike me!) and wrote every day for six years. My first book went straight to the desk drawer, but the second one was Time Villains.

Congrats on your debut middle grade novel, Time Villains! Please tell us about the story and what inspired you.

Time Villains is centered around the classic question, “If you could invite any three people (living or dead) to dinner, who would they be?” (Think Bill and Ted's Excellent Adventure in middle school.) The series follows Javi Santiago, a Puerto Rican sixth grade sandwicheaste who inadvertently lets Blackbeard the Pirate loose on his town when his antique dinner table actually brings his homework to life. Then Javi realizes that a lot of people in his town seem suspiciously out of place, sparking a time-hopping, reality-busting escapade.

The series was inspired by getting lost in a magical forest. Fifteen years ago my brother and I took a wrong turn while exploring Western France and ended up in Paimpont, Merlin’s enchanted woods. It was sunset, we raced around the ancient trees hoping we’d stumble on the legendary Fountain of Eternal Youth, and at some point realized we had to find our way back to our car before dark. The whole experience was so mystical and thrilling that it stayed with me. Over a decade later I had the seed to a story: a magical table that summons anyone from history or fiction to dinner. But why would a table be magical in the first place? The idea tossed and turned in my head for ages before I remembered the enchanted forest. Then I got very excited to create a series around it, casting all of my favorite fictional and historical characters.

Being a published author has been the dream since I was a kid, so it’s been quite the journey! In my teens and twenties I couldn’t silence my inner critic long enough to write novels, so I turned to poetry and screenplays, writing and producing documentaries for a spell. I finally coaxed a book out in 2017 after writing daily on my (long) commute for three years. It was a very unconventional first book—the only kind I could coax out on my first try—so I shelved it and started working on Time Villains.

Three drafts in I sent Time Villains to a bunch of agents, and after chatting with a few, a friend put me in touch with Elana Roth Parker. I feel so incredibly lucky to work with Elana—she saw the seed of something in my draft and we developed it into something far more compelling. When Annie Berger at Sourcebooks showed interest in the book, it felt like winning the lottery twice. Annie and the whole team have been the most incredible partners—thoroughly brilliant and a complete joy to work with.

What are some of your favorite classic MG novels? Recent ones?

The classic fantasy MGs were my lifeblood as a kid, from Narnia to The Hobbit. As a teacher my favorite read aloud by far was Half Magic by Edward Eager. As a dad I’m excited to read Italo Calvino’s Italian Folktales to my son and see if it inspires a similar obsession with folk tales.

I’m about to shop around a YA book that’s as far away from Time Villains as could be. It’s a very personal story about a trio of Latinx teens dealing with mental health issues in high school, with some supernatural elements woven in.

I think there are a few super important things that would’ve had me writing novels decades ago, so I take any chance I can get to relay them to other aspiring/young writers.

1. An hour a day can be enough. I always thought I needed to quit my job and write eight hours a day to finish a novel, which held me back for years. Then I read a Murakami interview where mentioned completing his first novel by writing an hour a day after work. At that moment I felt like the universe gave me permission to write mine.

2. Lower the bar far lower than you’re comfortable with for that first draft. (No, lower!) There are passages in the first draft of my books that are barely intelligible, but I now know that’s okay. The first draft is about discovery and getting the story out of your head and onto the page. It’s far too early to be precious about anything. Just get it all out and see what you’ve got when you’re done.

3. Don’t dread rewriting—it’s far more fun than expected. Before writing my first book I was terrified of it, but it’s become one of my favorite aspects of writing. (Which is a good thing considering it’s 75-90% of what you do as a writer!)

4. Read about writing and join online writing communities. Screenwriting books are great for story structure basics, Stephen King’s On Writing is great for process, Brandon Sanderson’s free writing course on YouTube is absolutely brilliant, Neil Gaiman and David Mamet’s Master Class courses are gold, and Reddit’s /r/writing is a fantastic place to learn alongside others in the trenches. I also love John Truby and Lisa Cron’s books.

I’m a huge poetry fiend. I read far more poetry than prose. My favorite thing to do is visit used book stores and unearth poetry books and collections I haven’t read yet. One of my goals as a writer is turning more kids (and adults) onto poetry. I’ve snuck multiple poets into Time Villains and hope to continue doing it with the sequels.