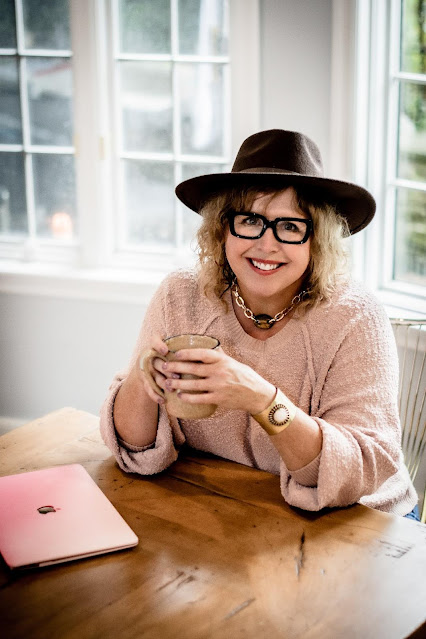 We are excited to feature author Leigh Lewis and her debut middle grade book, PIRATE QUEENS: DAUNTLESS WOMEN WHO DARED TO RULE THE HIGH SEAS, illustrated by Sara Gómez Wooley (National Geographic Kids), coming out on January 11! Enter to win a copy! 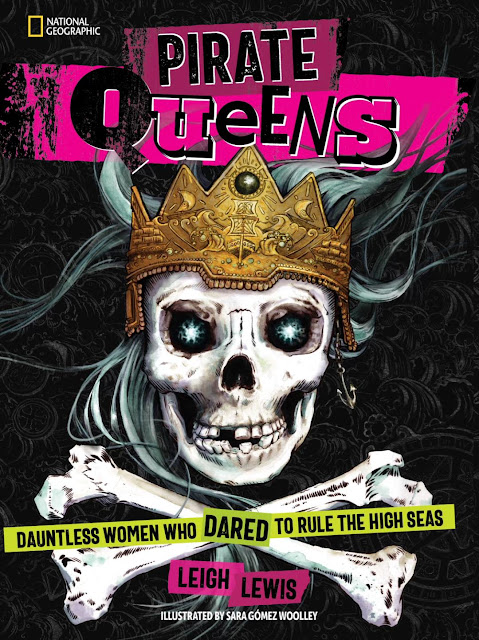 Thanks so much for having me here at Kidlit411!

The short answer is that for most of my life, I’ve been writing something, with the exception of about a decade when I just walked away from it. I was surrounded by kids’ books growing up and always encouraged to both read and write. My mom, Jude Lewis, was my pre-school teacher, and as a kid, I always had a book in hand, or was being read to by her. I wrote stories all the time, and then turned to journaling for years. After college, I stopped writing altogether for about ten years, then picked it up again and began writing stories and observations and screenplays. When I had kids of my own, my focus shifted to writing stories I thought they’d like. My dad, J. Patrick Lewis, is a poet and children’s author, so my first attempts at writing something for kids that I actually hoped might see the light of day were a number of picture books that he and I co-wrote. Nothing came of them, but eventually, we co-wrote a couple of board books that the wonderful Amicus Ink published, It’s Not the Baby and It’s Not the Puppy. After that, I started taking my own writing seriously.

Congrats on your debut middle grade book, Pirate Queens: Dauntless Women who Dared to Rule the High Seas! The title alone is fascinating. Tell us about the book and what inspired you to write it.

Thank you so much! Pirate Queens features six fearless women who bucked the system and beat the odds to become pirates. It’s a very eclectic group, hailing from China to Norway to Morocco to Ireland to Greece to the U.S. These women were driven to piracy for various reasons, from revenge, to desperation, to adventure, to outright greed. There’s Sayyida al Hurra, who was exiled as a child from Grenada during the Reconquista, and spent her life avenging that injustice. Or Artemisia of Caria, queen of the ancient Greek city-state of Halicarnassus and trusted advisor to the Persian king. In her most famous battle, Salamis, her boat was in hot pursuit by the enemy. To avoid capture, she raised the enemy’s flag to fool them into thinking she was an ally. Clever and cunning!

The idea for Pirate Queens first started when I heard about Ching Shih through a post in 2016 on Women You Should Know, one of my very favorite websites. Ching Shih was most successful pirate who ever lived (controlling a fleet of 80,000 men, compared to Blackbeard’s 300), yet no one I asked had ever heard of her.

Soon after that, I was at the swimming pool with my 3 daughters, and they were taking turns “walking the plank” off the diving board. I thought of Ching Shih, and asked them to name all the pirates they knew. They weren’t aware of a single female pirate.

As usual when inspiration strikes, I ran straight to the library to see what had already been written about Ching Shih. After weeks of research and months of fits and starts on writing about her, I realized late one night that her story would be told best in verse. My agent submitted my poem on Ching Shih to National Geographic, my dream publisher, and my wonderful editor Ariane Szu-Tu had the genius idea that it should be a book featuring a number of pirates instead of just one, and…Pirate Queens was born!

*Side note: As a kid, I collected National Geographic cards in a treasured green Illustrated Wildlife Treasury box. When my pet rabbit Flash died (most likely from eating slugs, according to the vet), there was no greater honor I could bestow upon her than to bury her in that box in my back yard. I heart National Geographic forever!

What is one really interesting thing you learned while researching and writing this book?

SO MANY THINGS! Ok, I’ll pick just one pirate. Let’s stick with Ching Shih, since she started my fascination with female pirates, was such an incredible force, and completely dismantled the existing status quo time and time again. We don’t even know her real name, or anything about her childhood, but when she married, she dictated the condition that she be equal partners with her husband. Imagine demanding that of a super-successful (and no doubt scary!) pirate who boards the ship where you work and insists that you marry him!

Anyway, here’s my favorite interesting fact about Ching Shih: When her husband died, she took over the huge fleet of pirates, and implemented a strict code of laws specifically mandating the fair treatment of women. Basically, her rules stated that no female captives were to be mistreated (unheard of!), and the majority were set free (heresy!). If a male pirate took a female captive as a wife, he was to remain faithful to her for life (say what?). Anyone who broke those rules was put to death. ICONIC leadership.

The first book I wrote (not co-wrote) AND submitted AND came close to getting published (meaning, there was interest from a couple of editors, and it was taken to acquisitions meetings but rejected then) was a funny, irreverent picture book called "Once Upon a Banana," about a monkey and her quest to stop a pesky Gorilla from stealing her lunch, armed only with banana puns. It was a timeless tale of banana, but alas, it never found a home. Kinda hurt my peelings, but life goes on.

Lots of false starts, with much initial interest that never made it over the finish line. And hundreds of rejections. Writing children’s books, or actually any books, is not for the thin-skinned, that’s for sure! It’s more rejection than a non-writer will ever face in their lifetime. I was in business for years, and I never experienced anything like the regular beat of “no” that is commonplace in publishing. All I can say is, stick with it! Realize you just need the one perfect fit for a book to be published!

I’ve always got a few things going at once. Too many ideas knocking around to focus on just one at a time. Bright shiny object!

One of the manuscripts I’m working on currently is a collection in the same format as Pirate Queens, about little-known female explorers, each written in a different verse form. I’m all about bringing the depth and breadth of women in history to light. Also, I’m somewhat obsessed with how Pirate Queens turned out, so I’d love work with the incredibly talented Sara Gómez Wooley and to use the same structure again (and again and again).

What advice would you give to middle grade nonfiction writers?

Uncover those gems! There are so many fascinating things that have happened or are happening or will happen in the world which haven’t found their home in a book yet, or which are begging to be told in a new/fresh/funny/fascinating way. Find an angle and a voice that keeps kids engaged. So many of the non-fiction books when I was a kid were like textbooks, dry and chronological. There’s absolutely no reason for that to be the case today.

Here’s a story I love about the importance of keeping your eyes open, writing down ideas when you have them, and never giving up. I once attended a monthly SCBWI meeting in Houston where author Pat Miller was speaking about where she got the idea for her non-fiction picture book, The Hole Story of the Doughnut. I hope I’m remembering this correctly, as it was many years ago! Anyway, Pat said she was on a walking tour in Boston when she passed the gravestone of Hanson Gregory, who was credited with inventing the doughnut. Years later, she attended a writer’s retreat which she hadn’t realized was intended to be non-fiction. She flipped through her master notebook of fictionbook ideas, and was relieved to find a lone non-fiction entry: The inventor of the doughnut. Pat spent the whole retreat writing what was to become The Hole Story of the Doughnut. Her first non-fiction! All because she once, years prior, had passed a cemetery and seen a sign that sparked some interest, and had written it down somewhere. I don’t know Pat and she doesn’t know me, but her story certainly stuck with me and informed my behavior ever since. (Thank you from afar, Pat!)

I’m not as organized as Pat, with the one master notebook of ideas. But I do write them down somewhere—post-it notes, texts to myself, a random word document or 7, Evernote….  It doesn’t really matter what your system is, just that you can find your ideas when necessary.

Well, I’d say people who know me in person would guess this, but the broader writing community wouldn’t know it, so here goes…

There, I said it, even though I slightly fear being avoided (nay, ousted) by the writing community, which seems to be made up largely of introverts.

I know, I know. It makes total sense that people who choose a solitary profession that also requires a huge chunk of time be spent reading are predominantly introverts. But there are some of us who don’t fit that mold.

Writing is kind of an odd life choice for an extrovert, but I’m a reader and a writer who recharges by being around others. I seek out opportunities to connect with others whenever I can, which means I’m big on parallel play, sitting side by side with one or two others and having writing sessions. I started a picture book critique group the moment I moved back to my hometown of Columbus, OH, five years ago, and it’s still thriving today. I spend a lot of time in the library, tossing ideas around with librarians. I may do my best work with a writing partner. So much of my life is spent alone with my laptop or with a stack of books, that it’s critical for my happiness to find opportunities to connect with others.

Oh, PLEASE come find me online. I truly love connecting with other writers and teachers. And librarians. I’d be lost without librarians. And KIDS! YAY FOR KIDS!

Leigh Lewis is a children's writer whose middle-grade debut, Pirate Queens: Dauntless Women Who Dared to Rule the High Seas (National Geographic Kids), spotlights six fierce female pirates, telling each of their stories in verse. Leigh’s adventures on the high seas have enabled her to call many places home, including Turkey, Greece, England, Japan and Russia, and she eventually navigated her way back to her hometown of Columbus, Ohio. Leigh spends her time there dreaming up stories for kids of all ages, buoyed by an amazing crew—her Turkish delight of a husband and their three swashbuckling daughters.