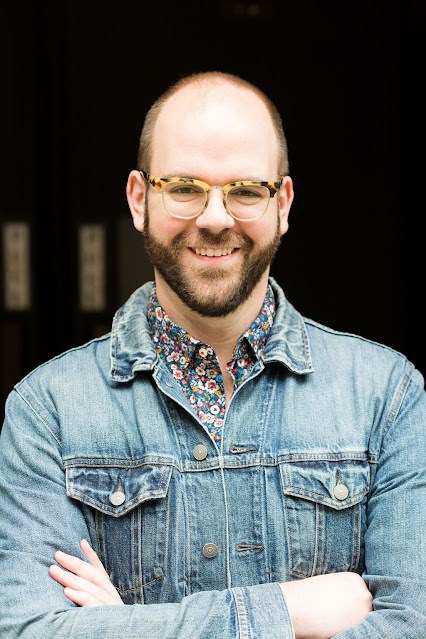 We are excited to feature author Erik J. Brown and his debut young adult novel, ALL THAT'S LEFT IN THE WORLD (Balzer+Bray March 8, 2022). Enter to win a copy!

I started writing for teens after reading The Knife of Never Letting Go by Patrick Ness. It really blew my mind how far YA had come in terms of risk-taking storytelling and I couldn’t get enough of it. After that I read the rest of the books in the Chaos Walking trilogy and I’ve been reading YA—and writing it—ever since. YA brings so much more diversity and nuance to storytelling than adult fiction, which we even see happening now in middle grade! It’s wonderful! Teens are also more willing to expand what they think in terms of genre. Some adults know what they want in fiction and only stick to that, while teens are still figuring out what they like to read. They’re more willing to risk reading new genres or blended genres they might not otherwise check out.

Congrats on your young adult debut, All That's Left in the World! Tell us about the book and what inspired you?

Thank you! I was watching a post-apocalyptic TV show which shan’t be named—but you all know the one—and I was getting so annoyed that EVERY character was straight. And the storylines were all terribly straight, too (seriously, there was a two-and-a-half season love triangle that ended with both guys trying to kill each other, one being successful, and finally the woman dying during childbirth of who knows which man’s baby? I genuinely don’t think you can get more heterosexual than that.)

I’ve since heard that’s changed but at the time, I wanted a postapocalyptic story about queer people! We’re already in the minority, so what happens when most of the planet’s population is wiped out in an apocalypse? And along with that, I wanted to explore a character discovering their sexuality in a postapocalyptic landscape. What does that mean for them? How do they discover it and do they then have the freedom to explore that because civilization has collapsed? Is there a place for queer people in this new world?

A little of both, actually! This was the fifth full manuscript I had ever written. I had queried four others before. The first draft of this book was written in 2015—and it was AWFUL! Seriously, the entire second half of the book is completely new. I knew it was bad but I couldn’t put my finger on what made it bad. So I left it on my computer and worked on other projects. I queried two more books, all the while I kept editing All That’s Left… in short sprints before finally deciding to buckle down in 2019 and really get it done. I finally figured out how to fix it and I knew I could make it good.

I started querying in mid-2019 starting with just five of my list of 20-ish agents who I thought might be a good match. I got two offers of rep and signed with my agent Michael Bourret at Dystel, Goderich, & Bourret. He gave me some notes on what to work on in fall of 2019, I sent him the draft in the New Year of 2020, and we went on submission in mid-February. It sold at auction on Friday, March 13, 2020. Friday the 13th and the first day of COVID lockdown. So even though it took five years the last few weeks of it were a complete whirlwind. And then of course it will be almost two years since the sale when the book finally does come out!

Did you have a playlist or mood board when writing your book?

A playlist! (I don’t know how Pinterest works, and at this point I’m too afraid to ask!) It had a lot of Americana, neo-folk, and new country (Andrew Belle, Orville Peck, The Paper Kites, Kacey Musgraves)—and a whole lot of Nina Simone (who is mentioned in the book). Since it’s a post-apocalyptic, road trip book I wanted that dusty, quiet road feel, and a lot of folk music has that. I also added a lot of Gustavo Santaolalla’s guitar tracks from The Last of Us Part 1 and 2 video game scores because it has the same post-apocalyptic feels and there’s a lot of overlapping themes in the games and my book!

Also, side shoutout to the team behind The Last of Us for creating the most emotional storytelling I have EVER seen in a video game. I’m not good at video games, but I do love them… So instead of playing TLOU, I watched playthroughs of both games on YouTube. By the end of TLOU Part 2 I was inconsolably weeping. It’s rare to feel such strong emotions from a movie/TV show let alone a video game. I still think about it and get teary-eyed.

I’m not sure how much I’m allowed to talk about my next book which I believe is coming out summer 2023? So I’ll say it’s completely different from this book. Where All That’s Left… is a postapocalyptic romance with adventure elements, my next book is a coming-of-age workplace comedy (based on my after-school job in high school) with romantic elements! I wanted to do something much less apocalyptic this time around.

Keep going. I know everyone says it, but it’s true. We hear a lot about people who write one book and it goes to an 8-imprint auction with a 7-figure advance and movie rights sold to Warner Bros. for $4 Million, which becomes an overnight bestseller, and spawns a franchise.

Except for writing the book. So keep going. Write the book. And if you don’t get anything from that first book and think you don’t have another one in you, let it sit on your computer for four years and then maybe revisit it. But I guarantee you will have another book in you. Another idea that keeps popping into your head while you’re trying to read or on the train or grocery shopping. Something that will drive you mad if you don’t get it out of your head. And that’s when you keep going.

I was trying to think of something fun for this but I’m pretty much an open book. I feel like the one thing that people would be surprised to find out about me, because I don’t often talk about it, is I’m a pretty spiritual person. Not religious at all, but I do believe what we put out into the universe we get back. I think a lot of that is reflected in my writing in subtle ways. Especially with All That's Left in the World where characters deal with their own versions of morality and what they feel is right versus what external factors affect the decisions they make and how they then feel about that.

Erik J. Brown (he/him) is a Young Adult writer based in Philadelphia. He graduated from Temple University with a degree in Film and Media Arts with an emphasis in Writing for Media. When not writing, he enjoys traveling (pre-pandemic), collecting disco compilations on vinyl, remodeling his haunted house with his husband, and embarking on the relentless quest of appeasing his Shiba Inu, Charlie. In 2021 he was selected as a Lambda Literary Emerging Writers Fellow. ALL THAT'S LEFT IN THE WORLD is his debut novel.