We are thrilled to feature author-illustrator Anne Appert and her picture book, BLOB (HarperCollins 2021). Enter to win a copy! 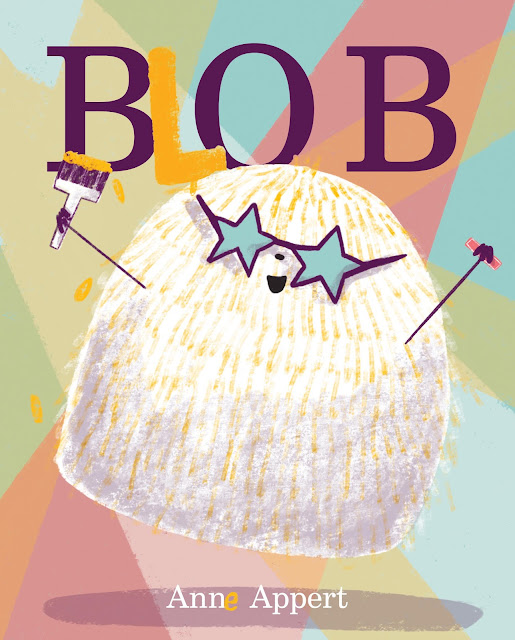 Thank you so much for having me on KidLit411! I am an author/illustrator from NJ, and storytelling has always been an important part of my life. As a child, my mom would read books like Charlotte’s Web and Winnie the Pooh to me and my siblings. My dad would make up tales about a thoughtful bear and his adventures in his forest home. My earliest memories include frequent trips to the public library with my parents, and these trips instilled a love of books in me. My siblings and I also enjoyed creating epic games of make believe in our backyard. Storytelling was an escape for me as a child, whether through my own creations or losing myself in the pages of a book. While in high school, I saw a college advertisement with illustration listed as a possible major and a light bulb turned on for me. I knew exactly what I wanted to do: I wanted to write and illustrate for children. 10 years after graduating, BLOB was published.

Congrats on your picture book debut BLOB! Tell us about the book and what inspired you.

Thank you! BLOB is a humorous picture book about a creature of indeterminate kind. Blob can be a giraffe, cotton candy, and even an octopus. It’s not until they are continuously called “Bob” that Blob starts to question who they really are. After exploring all the possible things they can be, Blob realizes that the best thing to be is Blob. (With the L.)

BLOB started as a joke, and, if I’m being honest, I wrote it in a moment of spite. I had created various animal characters for a project, and the feedback I got kept confusing the animals for animals they were not. A skunk was mistaken for a badger, a squirrel for a cat and so on. In fake exasperation I told a friend that my new bio would be: though you can’t tell what kind of animal I drew, at least they were cute and blobby. Immediately the character of Blob popped into my head. Blob could be ANY animal. I drew a couple of illustrations of BLOB and shared them on social media. The response was so positive I decided to write a book for Blob.

Fast forward a year, and my editor asked me to write about the why behind creating BLOB.  It was then that I made several discoveries about my inspiration and how much of it was rooted in memories of my own childhood. I really did not like being asked by adults what I wanted to be when I grew up. I had no idea! I just wanted to be a kid. Also, as a twin and one of the youngest in a large family, I was constantly called the wrong name. Some of the adults in my life made no effort to call me or my sister by our names and instead called us Apps A and Apps B. The insistence on the “L” for Blob is the same reminder I still do with the “e” at the end of my first name. The feelings behind these memories collided to create Blob’s message: be you. Be you, whatever that looks like. Stand up until others recognize you AS you, no matter how many times it takes.

Some sections of my road were winding and hard, but they led to moments that were sweet and bright. I knew at 17 I wanted to create children’s books. After I graduated college, it took me 7 years to put together a portfolio with illustrations that were good enough to work in this industry. I attended a lot of SCBWI events and participated in other groups like the 12x12 challenge and the children’s book illustrator group in NYC to learn as much as I possibly could about the industry. I read many articles on KidLit411 and joined critique groups. After I signed with my agent, we subbed a couple projects, some of which got close to selling but were ultimately passed on. About a year and a half after signing with her, I met my editor at a portfolio event. She saw my Blob illustrations and contacted my agent the next day to ask for the dummy. That week she told us she was bringing it to acquisitions and made an offer within 2 weeks. 2 years later, BLOB arrived on shelves.

Do pictures or words come to you first?

Both! It depends on the project. Sometimes I’ll get a story idea from an illustration I’ve created. Other times a phrase or a title will pop into my head. And, like with Blob, sometimes the character and a clue to who they are appears. I spend a lot of time thinking things through before I put anything on paper. Typically, words are the first part of my process, even for illustrations! I often write a description of what I want to draw before I start sketching.

I am working on a second picture book with HarperCollins. This one is a lyrical piece with a much different art style than BLOB. It’s been a great challenge to see how I can push myself. I’m also working with my agent to create young graphic novels and make them ready to go on submission. When not working on those, I am also working on some middle grade graphic novel ideas and a novel in verse. No one has seen any of these yet! I am very much an ideas person, so I typically jump between 3-5 projects at a time.

This is a wonderful industry with so much to learn and I recommend not rushing that process. It is worth taking the time to create a strong, industry-level illustration portfolio and/or strong, marketable manuscripts. Don’t skip the learning: read a lot of books in the genre/format you want to write, go to events, read a lot of articles. Then write. Draw. I highly recommend critique groups and professional critiques as a way to see if your work is ready. This usually takes more time than people want it to, but the results are worth the wait. Blob would like to add, be yourself! You are unique, and we can’t wait to hear your voice, when it’s ready.

When I was seven, I had a terrible head injury that resulted in a chipped bone and many stitches. To keep me distracted in the ambulance, an EMT named Howie gave me a home-made, sky-blue teddy bear who I promptly named Howie.  Howie the bear has gone many places with me, and, if you look, you’ll often see him pop up in my art. (he’s not in BLOB but take a look at my other illustrations).

You can see my portfolio on my website  anneappert.com. There you can sign up for my newsletter for inside information on what I’m creating. I am also very active on twitter at Anne_Appert where I co-moderate the weekly kidlitart chat on Thursdays. You can also find me on instagram at anneappertillustration. 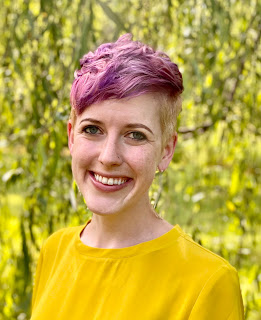 ANNE APPERT (she/they) is an author/illustrator who spent her childhood with her nose stuck in a book, while her wild imagination transformed her New Jersey backyard into faraway places. She still enjoys spending time in her backyard dreaming, and now her imagination turns her dreams into words and pictures for children. Anne wrote and illustrated their debut book BLOB which was published by HarperCollins in Fall of 2021, with a second book to follow. They are also a member of SCBWI, from which they received an honor in the 2021 Winter Conference Portfolio Showcase. Anne finds her inspiration in nature, anything colorful, and traveling.