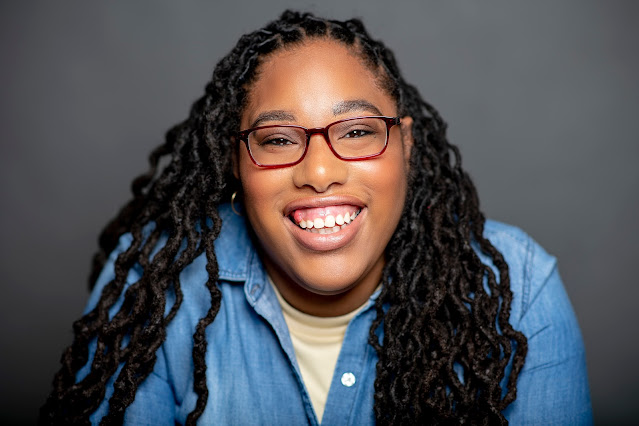 We are excited to feature author Joy Smith and her debut young adult novel, TURNING (Denene Millner Books, an imprint of Simon and Schuster) on March 1. Enter to win a copy!

I'm Joy. I grew up in Brooklyn and Queens and you'll see a lot of that in my writing. I enjoy live theater, particularly  musicals and anything that features dancing. I realized I was a writer when I wrote a ton of fan fiction and screenplays for my favorite boy band B5. I started writing for teens when I was a teenager through the Girls Write Now program. It's an awesome mentoring program that puts women and teen girls together to explore the many types of writing and careers that go with it! So you could say I haven't stopped writing for teens since. It was a huge part of my life.

Congratulations on your debut YA, Turning! Tell us about it and what inspired you.

Thank you! Turning is about Genie, a seventeen year old ballerina who is in the early stages of figuring out what her life is going to be as a dancer who can't dance due to a sudden injury. Instead of working with everyone who is there to help her transition into her new life, she fights the change, kicking up some old emotional injuries from living with a recovering alcoholic. Not to mention her ex boyfriend who was there the night of the accident is still hanging around. But she meets a gymnast, Kyle from physical therapy who's adjusting to a new life as well. Turning is all about choices, confronting your past and owning your decisions.

Did you have a playlist or specific shows that inspired you?

I didn't make a playlist until after I got my ARCs and honestly it has no ballet on it. I did however watch a lot of Genie's favorite ballets and dances she references, just to get a feel for what inspired her as an up and coming dancer, and the skill required for such choreography. For myself I played a lot of my favorite musicals because they're such passions for me, and Genie and I have that in common. She dances the same dance over and over and I play my favorite show tunes over and over.

Was your journey to publication long and winding, short and sweet, or something in between?

My road to publishing was definitely long and winding. On one hand however, Turning was the only book I ever finished and the only book I've queried. I met my agent, Saba through #DVpit on Twitter,  and it wasn't an open and close deal. I did a revised and resubmit (R+R) for her, then she signed me afterwards. We did more edits followed by going on submission which took a while. I did another R+R for an editor, but that didn't pan out. All in all, from submission to book deal it was 2.5 years. I could stack on the time for getting an agent, but that would put everything over 3 years.

Don't remind me! I have too many projects I'm working on, that's why none are close to being done. I have about four projects I'm holding close to me. All YA contemporaries with Black girl protagonists.. Lots of drama and complicated relationships. I clearly have a type of novel I like to write. I hope I finish one soon!

My greatest advice to my younger self would be to keep writing. And I don't mean that in the way of writing a chapter or x amount of words everyday. I mean if you love to write like I know you do, write for fun. Just write. Whenever and however you can. I think for all aspiring authors you have to write for yourself first. If you don't enjoy what you're writing, or if it's not bringing you joy, why would it for someone else? So keep writing if it makes you happy, and whatever will become of it will.

Joy L. Smith is a childcare professional and lives in Queens, New York. A graduate of SUNY New Paltz, she has a bachelor’s degree in human development and differences, with a specialization in communication disorders. She’s been writing since she was a teenager and has been mentored by Ibi Zoboi, Radha Blank, and Emma Straub through the Girls Write Now program. Turning is her debut novel.