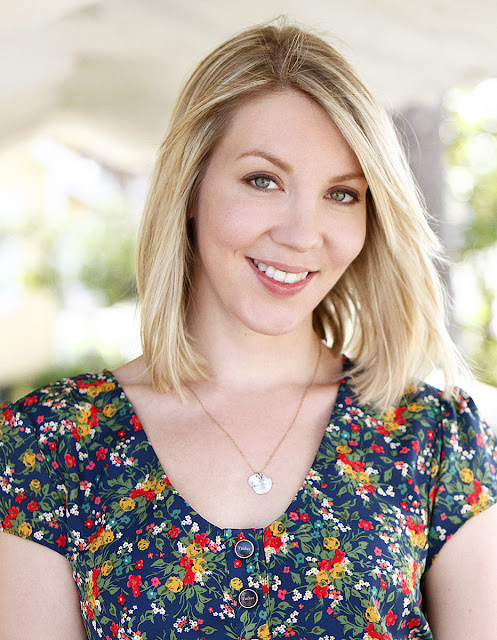 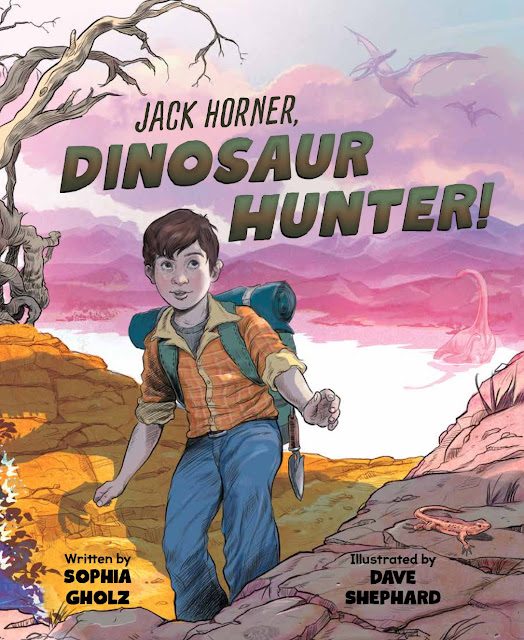 Thanks so much for having me! name is Sophia Gholz and I’m a U.S.-based author of fiction and nonfiction picture books.

I’ve always loved reading books. As a kid, I read books to escape, to explore, and to find comfort or inspiration. Books were always there for me in one form or another. As I got older, I wanted to create my own worlds to escape to, my own friends to adventure with, and I hoped to share comfort and inspiration with others. So, I began telling stories.

Congrats on your new book, Jack Horner, Dinosaur Hunter! Tell us about the story and your inspiration.

Thank you! Jack Horner, Dinosaur Hunter! shares the true story of world-famous paleontologist, Jack Horner. I originally stumbled upon Jack as I read quotes of his while I researched another potential project. As I fell down the rabbit hole of research, I began to focus on Jack and his fascinating life. It was awesome that he was the person who inspired the main character in Jurassic Park, and super cool that his discoveries changed the way people view dinosaurs. But what really connected me most to his story was that Jack struggled in school. He was brilliant but failed his classes due to severe (and undiagnosed) dyslexia. Jack grew up, had jobs, fought in Vietnam. But through all of that and despite his struggles academically, Jack never lost sight of his truest passion and dream: to become a paleontologist. 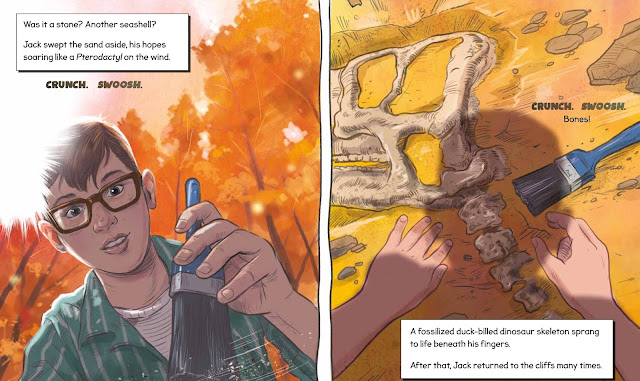 As someone who also struggled in school and felt like I had a bit of a wandering path, Jack’s journey really inspired me. Not every path in life is a traditional or straight one. In fact, I think most of us hit roadblocks or have to redirect a lot. There is no “normal” path in life and differences don’t have to hold us back.

This is my sophomore book and I have to say the making of it had a couple more twists than my debut. My first agent and I parted ways soon after the sale of my debut, The Boy Who Grew a Forest. So, I had to start fresh and begin again with Jack Horner, Dinosaur Hunter! only this time I was querying agents as a published, but not yet released author. It was a bit strange. I queried agents and went to writer conferences for almost a year before I attended the Rutgers University Council on Children’s Literature (RUCCL) conference in New Jersey. At that conference, I was paired with an agent named Liza Fleissig as my mentor. Liza was wonderful. I really connected with her and loved the feedback she gave me for Dinosaur Hunter. 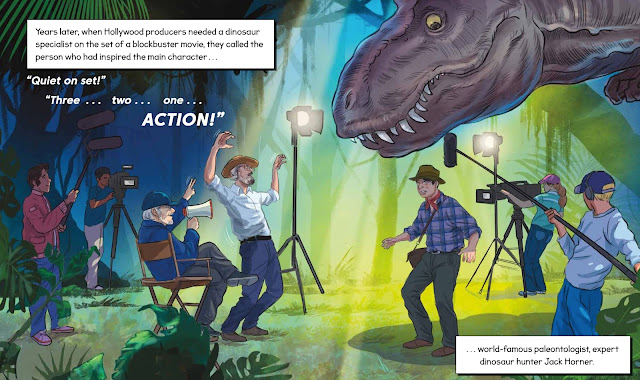 Shortly after the conference, I revised this manuscript (for the umpteenth time) and officially queried the Liza Royce Agency. Not long after that, Liza was on submission with Jack Horner, Dinosaur Hunter! When Sarah Rockett (Sleeping Bear Press) responded, I was so happy. We’d had wonderful feedback from other editors and requests, but I’d worked with Sarah on my first book and her enthusiasm for this project was unparalleled. For the most part, things went along smoothly. But as a lot of authors who have published in the past two years can attest to, putting out a book during the pandemic has not been without its challenges. I have to say that I am very grateful for a supportive publisher and our writing community. The kid lit community has been incredibly uplifting and I’m very thankful to everyone in it!

What projects are you working on now? Any new books coming out?

I’ve got a new picture book—my fiction debut!—coming out very soon and I’m super excited. Bug on the Rug is a hilarious friendship story illustrated by Susan Batori that releases April 15th. Hooray! In August, my first expository nonfiction picture book will be released. A History of Toilet Paper (And Other Potty Tools) humorously guides young readers on a wild adventure through the history of human hygiene. A History of Toilet Paper is illustrated by Xiana Teimoy and will roll onto shelves 8/2/22! I do have a few other projects in the works, and I hope I can share more soon. Stay tuned!

What advice would you give your younger self? Is this the same as you'd give to aspiring authors?

My goodness, where do I even begin? Oh, how I wish I could go back and talk to my younger self. I think that, more than anything, I’d like to just tell myself you can do it. It is possible. You are not less than. All those trashed manuscripts, false starts, and rejection letters aren’t mistakes and proof of your failure. Those long moments of creative pause and endless blank paper are not for naught. They are just steppingstones to carry you where you’re eventually supposed to be. Take a deep breath. Hang in there. It will happen. Promise.

Hmm…I feel like I’m an open book. That said, I think most people don’t know that I love to name inanimate objects around me. I give everything a name and personality. My car has a name. My plants have names. Pens, clothes, pots, pans…all of it. Everything around me has its own little life and backstory.

People can find me online at:

Sophia Gholz is an award-winning children's book author, music lover, magic seeker, and avid reader. Sophia enjoys writing fiction with humor and heart. When writing nonfiction, she pulls on her love of science and her strong family background in ecology. Since 2017, Sophia has helped oversee the Henry L. Gholz SEEDS National Field Trip Endowment for The Ecological Society of America, funding ecological field experiences for students from diverse backgrounds. Sophia’s debut book, The Boy Who Grew a Forest: The True Story of Jadav Payeng, received the Florida State Book Award Gold Medal, a Eureka! Nonfiction Honor Award and was named a 2020 Green Earth Honor Book. When she’s not writing from her home base in Florida, you can find Sophia reading, visiting schools or exploring the great outdoors with her family.