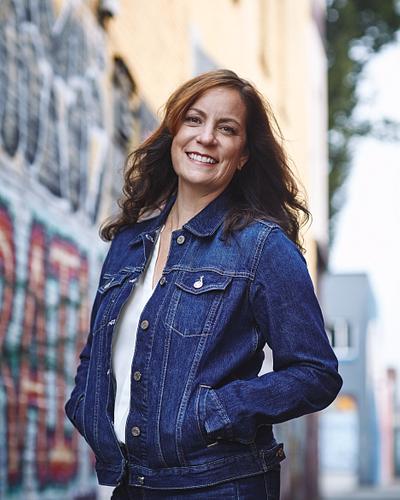 We are excited to feature author Vanessa L. Torres and her debut young adult novel, THE TURNING POINTE (Penguin Random House Knopf Books for Young Readers) coming out on February 22. Enter to win a copy!

Hi! My name is Vanessa L. Torres. I was born and raised in Minneapolis Minnesota and now live in Washington state with my husband and daughter. I have been a firefighter paramedic for over 25 years. I love my job! But I’ve always wanted to be an author.

Being a first responder is very dynamic. Some days, we are busy every minute of the twenty-four-hour shift. Others, we have a lot of down time. I began taking advantage of those moments of peace by writing down my story ideas.

Then, I implemented a youth first responder program for my department and found myself working with teens a lot. It was so much fun! My “kids” were defiantly my inspiration for writing young adult books.

Congrats on your young adult debut, The Turning Point! Tell us about the book and what inspired you?

Thank you so much! The Turning Pointe is a story that follows Rosa Dominguez, a Mexican American Prince-obsessed ballerina in 1980s Minneapolis. Born into a family of accomplished dancers, Rosa is weighed down by rigid expectations—to continue the Dominguez legacy and become a prima ballerina. But Rosa longs to be done with her pointe shoes. She dreams of letting her hair down and dancing to a funky beat, though she knows it will drive her family further apart. And the Dominguez’s are already struggling to keep it together following significant trauma and change, something for which Rosa blames herself.

Then, Rosa discovers Prince is using the studio above hers to rehearse for the movie Purple Rain. There’s soon an announcement that rocks her world even more—auditions for the opportunity to dance on stage with Prince. Her chance to break free of her legacy and groove the way she’s always wanted is now. Then, Nikki struts into her life, a gorgeous funky dancer who looks better in his pointe shoes than she does. Caught up in the excitement of new love, and the possibility of following her dreams even though it may break her family forever, Rosa is at a crossroads. The Turning Pointe is a book about grief, finding forgiveness, the search for self-love, and the discovery of what really matters.

What inspired me to write the book?

I could easily say, my love for Prince and his music. And yes, that would be totally true. I’ve been “Prince-obsessed” like my main character, Rosa, since I was twelve years old.

After Prince died, I couldn’t stop thinking about my time as a dancer at The Minnesota Dance Theatre. It was 1983, and word traveled fast around the studio that Prince was taking dance classes under our roof.

I found every opportunity I could to sneak upstairs and watch him perfect his pirouettes. So, yeah, those memories were the initial spark for the book.

I grew up in Minneapolis, as one of the few inner-city kids dancing on financial assistance for MDT’s Children’s Performing Arts Division. I came of age in downtown Minneapolis. I hung out in places I probably shouldn’t have been hanging out in. So many of those places, people, and experiences made it into the book. But moreover, as I wrote, the story also became about my own identity, and how growing up, I never felt like I fit in any one space. I am from a wonderful, close, Mexican American family—one that did not pass down speaking Spanish to the younger generations. For my grandparents, it was about assimilation and being protective of their children, knowing the obstacles being mixed race often brings.

I never really feel I belong anywhere, one hundred percent of the time. I could not have written Rosa’s story about her finding forgiveness and self-love, without including my own struggles.

My road to publishing was long, winding, excruciating at times, but really, I wouldn’t change a thing. Well, maybe one thing.

I started with writing screenplays. I am a huge movie fan and I dreamed of seeing my work on screen one day. So, I took a class, got myself some Final Draft software and wrote a screenplay. I signed up for a screenwriter’s conference and showed up, a wide-eyed rookie with my work in hand. The pitching part was awful. I was terrible at it and one of the producers was not interested in my writing at all. Instead, he made super inappropriate comments about my appearance and then asked me out. It was a terrible experience, and I left completely discouraged.

I let my writing go for a while, though I really missed it. I kept a notebook of story ideas, hoping that someday I’d have the nerve to try again.

About two years later, I decided to write a novel. I knew I wanted to write young adult because that’s what I loved to read. I joined a critique group, which was pivotal in honing my craft.

I finished my book, gathered my courage and took it to a pitching forum at another writer’s conference. The response was good, and I received quite a few full manuscript requests. But my skills weren’t quite there yet. Agents loved my writing, but my story structure needed work, pacing issues bogged down the second act. I wasn’t ready. I revised and revised, my book was even placed in a couple of literary competitions. Still, no luck getting signed with an agent.

Putting that first book aside was very difficult. I’d poured my heart into the story. Did I have it in me to start all over again?

Then, I wrote The Turning Pointe in less than a year. The story is a piece of my heart, just like my first one. But there was something special about it. I could feel it, though I was very nervous moving forward.

I queried many of the same agents who’d read the full of my previous manuscript. After two revise and resubmits, I received three offers of representation.

I was over the moon. I signed with my wonderful agent, we did one round of revisions and then went on submission. In two weeks, we had several offers. The Turning Pointe went to auction and eventually sold to Penguin Random House Knopf BYFR. I received a two-book deal. I still pinch myself now and then.

Did you have a playlist or mood board when writing your book?

Yes! I always listen to music while I write. In fact, I have a Spotify Turning Pointe playlist on my website. Here it is!  https://www.vltorres.com/playlists

I also loved streaming classes from professional ballet companies while I was writing TTP. A lot of companies go live with their classes, and anyone can observe, or follow along. Sometimes, I’d have a tab open to stream The Royal Ballet Theatre and play it behind my working document. Just the sounds of the ballet class pulled me in and were super helpful while writing complex ballet scenes.

Currently, I’m working on my second young adult novel, to be published by PRH Knopf BYFR. The release date is TBA. It is another stand-alone book. Although I can’t say too much about it, I will share that it is inspired by my time as a firefighter/paramedic. It has been pretty emotional to write, but also fun to work on something different.

So many things come to mind. And I’m still learning as I go too. I would say to anyone aspiring to become a published author, don’t be surprised if the book you are currently writing, doesn’t end up being THE BOOK—the one that gets you a contract. Someone once told me the same and I refused to believe this could be the case for me. And it was. My first book was my practice book. I still love the story and think about it quite often. But it wasn’t ready, and I can see that now.

Plot twist! My agent and I have been talking about revisiting a revision when the time allows. So, there’s a possibility my practice book could be published. The moral of the story is, no writing is wasted time. You just never know what could become of your manuscript in the drawer.

This is a tough one because I tend to over-share. ☺

But you asked, so here we go.

I am afraid of monkeys. I can’t explain this at all.

Though I am a paramedic, eyeball injuries creep me out. I almost can’t type about it as I confess this. I may need someone to unpack this for me.

AND, I secretly wish to become Indiana Jones when I grow up.

If you still want to read my books after all that, bless you.

Vanessa L. Torres is an author of books for young readers. She loves to read anything with a vivid setting, but there's a special place in her heart for urban tales. She was born and raised in Minneapolis Minnesota, and now lives in Olympia Washington with her husband and daughter. She is a proud member of Las Musas, the first writer/illustrator collective of Latinx women and otherwise marginalized people whose gender identity aligns with femininity.

When she's not writing, she balances her time between anything outdoors, and her other job as a firefighter/paramedic. And when the snow hits, you might catch a glimpse of her ski patrolling on the mountain.