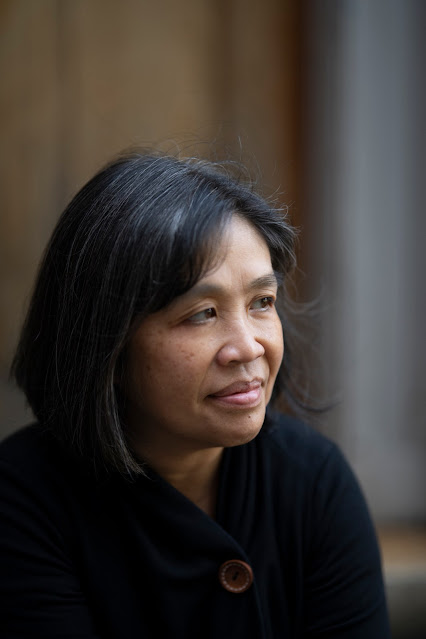 We are excited to feature author Betty G. Yee and her debut young adult novel, GOLD MOUNTAIN (Carolrhoda Lab) out on April 5. Enter to win an ARC!

Reading has always been a source of comfort and joy. From an early age, I learned to climb into the world of books. I never  wanted the stories to end, so I spent a lot of time retelling my favorite stories to myself in my daydreams, sometimes changing scenes, adding new characters, even inserting entirely new adventures. I longed for sequels and if they weren’t forthcoming, I made up my own. I began writing down some of my re-imaginings. Before long, I realized that more and more of the stories had veered far from the source material, and moreover,  I enjoyed and prefered creating my own worlds and characters.  I write stories for adult, MG and YA audiences, but I feel that MG and YA is my true inner writing voice.

Congrats on debut young adult novel, Gold Mountain! Tell us about the story and what inspired you.

Thank you! In 1867 fifteen-year-old Tam Ling Fan disguises herself as a boy and journeys from China to America to work on the transcontinental railroad. She vows to earn the money desperately needed to save her father, but encounters far more danger than she ever anticipated.

I’ve always been curious about the Chinese workers who came to work on the transcontinental railroad. As I looked into information about them, I was amazed by two things in particular. The first was the incredible hardships the sojourners endured. The second was the lack of detailed information about them. Who were they? Why did they come to America? What were their lives like during their sojourn? It was this lack of clarity to my questions that inspired me to write my story.  I wanted to put a potential face on the unnamed railroad worker, and in so doing, open a door for  more people to ask the same question.

The road to publication was very long, mostly because I never dreamt that GM would be published! I started GM for myself and shared it in my writing group and some writing classes. Their enthusiasm and encouragement led me to submit it to SCBWI’s 2011 Works-In-Progress grant contest. Winning the grant provided the incentive to make a serious attempt at publication! After that it was still many  more years of heavy duty revisions before I felt it was ready to go out into the world.

Tell us about your process for researching a historical novel. What are some interesting tidbits you learned?

I started off by getting a general sense of the time period both in China and in the United States. I wanted to get the perspective of the  big events before and and after the years that GM takes place. I read extensively about construction of the railroad–Stephen E. Ambrose’s Nothing Like It In World was an invaluable resource as was Lila Perl’s To the Golden Mountain.  I made a timeline of major milestones in  the Central Pacific’s progress because I wanted to embed as much of that into the novel as possible. This was tricky as the actual timeline doesn’t fold perfectly into the novel’s timeline. Some historians may find fault with this but I feel that in the end, GM is a work of fiction.

What I was most surprised by in the  course of my research  was how little information there is on the lives of the Chinese sojourners themselves. There don’t appear to be any primary source material–no letters, no payroll records, etc. There’s a lot of detailed information about the financial backers and details about the construction work, but virtually nothing on the Chinese workers themselves.

Shortly after I finished work on GM, I learned about Stanford University’s Chinese Railroad Workers in North America Project. I encourage anybody interested in learning more about these remarkable workers should check it out!

I have a couple of projects simmering in the back of my mind! I’m working on the first draft of a MG fantasy novel based on some Chinese mythological figures.

What advice would you give your younger self? Is this the same that you'd give to aspiring authors?

To myself and aspiring authors: Don’t give up! Find fellow writers–they’ll keep you going! Write what you want to read, or wish you could have read when you were younger.

I am a huge sci-fi and fantasy fanatic!

Where can people find you online

Betty G. Yee was born and raised in Massachusetts. She spent much of her early life reimagining her favorite stories or writing sequels to them. Betty has been an elementary school teacher for over twenty years. When she’s not teaching or writing, she enjoys traveling, bike riding, eating french fries and immersing herself in the words and worlds of other writers. She lives with her two bossy cats, Zara and Piper.Her stories can be found in The Drum Literary Magazine, Hunger Mountain, Frost Fire Worlds, and RAZ Kids. She is the recipient of SCBWIs 2011 Multi-Cultural Works-In-Progress Grant. Gold Mountain is her first novel.