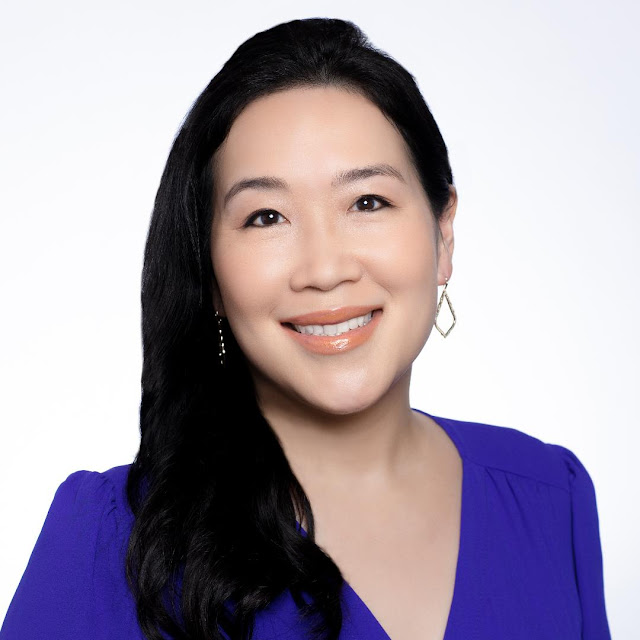 Hello. My name is Jenna Yoon and I’m the author of Lia Park and the Missing Jewel which is available now! I lived about half my life in Korea and the other half in the States. My background is in art history and I have a masters in Korean Art History.

I always wanted to be a writer, but as a child I didn’t think it was a possible career path for me because I didn’t see any authors that looked like me. I even considered using a pen name at one point. After having my daughter, I loved seeing the world through her eyes. She loved all the Disney princess, especially Elsa. She begged me to get her an Elsa wig, which I happily did. But one day, she started crying inconsolably. When I asked her what was wrong, she angrily pointed at her Elsa wig and demanded to know why her hair was not yellow like Elsa’s. Why did she have to have boring black hair? It broke my heart that even at this young age, she was aware of the differences and that it hurt her. I searched high and low for books with Asian main characters and sadly did not find very many. It was after this incident that I started to write again for children. I started writing picture books but quickly discovered that the stories I wanted to tell would be a better fit in a longer form and switched to writing middle grade books.

Congratulations on your middle grade debut, Lia Park and the Missing Jewel! Tell us about the story and what inspired you.

Lia Park and the Missing Jewel is a thrilling middle grade contemporary fantasy that follows the adventures of a young girl as she ventures into the underworld kingdom of the Dragon King to save her parents from an evil diviner spirit. This book is perfect for fans of the Aru Shah series and Storm Runner.

Lia Park is a Korean-American tween, who just wants to fit in. Her family belongs to a secret magic organization that Lia always wanted to join. Except for one big problem. She has no magic – or so she thinks. Lia decides to be a part of the normal people world instead. When she receives an invitation to the birthday bash of the year, her over protective parents forbid her from going. But Lia sneaks off and goes anyway because she believes that this will change her life. This sets off a chain of events leading to her parents being kidnapped by an evil diviner spirit. Lia travels to Korea with her best friend Joon, and must follow the clues left behind by her parents and recover the jewel before it’s too late.

I was inspired by my studies of Korean mythology and art history and wanted to incorporate it into a fun fantasy adventure so that it would be an easily accessible entry point into Korean culture for all kids, and that it would spark their curiosity. Lia Park and the Missing Jewel was written for my daughters. So that they would have a main character that looked like them. Growing up, I didn’t see main characters that looked like me. After having kids, I wanted something different and better for them. In a small way, I feel like I am doing my part in creating a more diverse and inclusive world for them, where they can be the heroes of their own stories.

It was both long and short. I started writing stories as a little girl in elementary school and writing was always a creative outlet for me. I never thought I could be an author, so most of those stories lived in my journal or laptop and were never shared. However, when I decided I wanted to write a book, my road to publication was on the shorter side.

I started writing Lia Park when my toddler at the time started preschool and I was pregnant with my second. In some ways this motivated me to work faster, in between my naps, because I wanted to finish and query agents before I gave birth. I pitched at #dvpit (Twitter pitch contest) and received likes from agents. I queried all these agents right before giving birth and assumed that I wouldn’t hear back for a while. Excitingly, I got full requests a couple weeks after giving birth and eventually signed with my agent, Penny Moore.

After revisions with my agent, we went on submission. I thought the process was nerve racking and I remember constantly refreshing my inbox multiple times a day. A few weeks later I signed with my editor, Alyson Heller. This was a couple days days before the pandemic started! It’s a dream come true to, not only to have this book published but to also work with a Korean agent and a Korean editor on a book with a Korean main character.

What are some of your favorite classis MGs? Recent ones?

I loved all of the Beverly Cleary and Judy Blume books because there was so much heart and humor. Some recent middle grade favorites that I’ve enjoyed are The Last Fallen Star by Graci Kim, Stand Up, Yumi Chung by Jessica Kim, Mindy Kim series by Lyla Lee, The Total Eclipse of Nestor Lopez by Adrianna Cuevas, Sir Fig Newton and the Science of Persistence by Sonja Thomas, A Comb of Wishes by Lisa Stringfellow, and The Last Shadow Warrior by Sam Subity.

Currently, I am drafting Book 2 of the Lia Park series, which will be coming out next summer. It’s in the very early stages, but I’m so excited to share more of Lia’s adventures with you!

One advice I would give to aspiring writers would be that it’s okay to not write every day. Sometimes taking a mental break and refreshing your creative well could do wonders. I learned this lesson the hard way. During the pandemic I was taking care of two young kids yet I forced myself to write, because I needed to feel productive. This eventually resulted in burning out emotionally, mentally and physically. I learned my limits, how to manage my time, and most importantly, to let go of needing to write every day. Of course, when I’m on deadline, that is a completely different story. Then there’s only do. ;)

Jenna Yoon studied art history at Wellesley College and received her master’s degree in Korean art history from Ewha Womans University. She’s lived about half her life in Korea and half in the United States. When she’s not writing, Jenna loves to travel, find yummy eats, play board games, and she takes skin care very seriously.