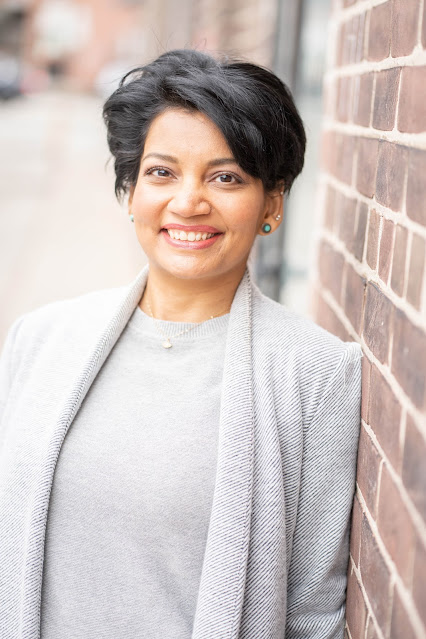 We are pleased to feature author Salma Hussain and her middle grade debut, THE SECRET LIFE OF MONA HASAN (Tundra), out now! Enter to win a copy (Canada addresses only)!

Like many (if not all?) writers, I’ve been writing since I myself was a child. I’d written mainly short stories and poems and had never seriously considered writing for children, though I often was drawn to writing in the voice of a child.

After I had children of my own, I then felt the need to entertain and enthrall my own children with stories that spoke to them. That’s how I started writing for children.

Writing is something I’ve done my whole life. Publishing, which is a very different beast, is quite recent. This is my first published novel.

My own kids are still a bit too young for the type of upper MG/veering-into-YA-territory novel that I’ve written but I wanted something that would speak to that magical middle-grade time in our lives – tweenhood and adolescence and puberty – when we don’t yet fully know what the rules are or who we are and we’re figuring it all out and there’s all this possibility and magic out there in the world. We can be anything. We can do anything.

Congrats on your MG debut, The Secret Diary of Mona Hasan! Tell us about the story and what inspired you.

The origin story for this novel is that my daughter when she was 5 asked me sleepily at bedtime, "you were born outside Canada, right mama? Were you a regular kid just like us?" That moment for me was the spark for the entire book. In that moment, I knew I wanted a fictional child to answer my real child’s question. I wanted to explore in what ways are the kids who grow up outside Canada different and in what ways are they the same? I knew I wanted to write a book in diary format and I knew I wanted to present certain kind of kid – a cheeky, mischievous girl (in the vein of Harriet the Spy or Anne of Green Gables) and that this character was going to go on an immigration journey similar to the one I made.

The Secret Diary of Mona Hasan is about a young Muslim Pakistani girl who immigrates from Dubai to Canada and is at that stage in life where she’s looking out at the world and marveling at both its splendour and questioning its absurdity.

Mine was atypically short and sweet!

I started writing this book seriously in 2018. I had two writing groups and met up with them monthly. I also completed an invaluable mentorship program through Diaspora Dialogues in 2019, after which I submitted 10 sample pages to a program called Pitch Perfect, which is hosted by a literary festival here in Canada (Fold Literary Festival). At this program a writer is paired with an industry professional for a "flash assessment" of their opening 10 pages. The industry professionals are a mix of literary agents and/or editors at publishing houses who volunteer their time to support the arts. It just so happened that my industry professional was a literary agent who instantly “got” the story, knew of and loved the comparative titles I had referenced in my query letter and she requested the full manuscript, after which she offered representation! We spoke over the phone and we vibed really well. I signed with her. She was the first agent I ever submitted to. Because of her love for the manuscript, she was able to sell the manuscript 6 months later and my book came out May 3 of this year through the Tundra imprint of Penguin Random House! Everyone says publishing moves slow, but in my case, I felt it moved really fast! I love my agent. She's really down-to-earth and sweet and really champions children's literature and it's been a fantastic ride so far!

I would love to publish another MG told from the POV of Mona’s younger sister, Tutoo, so I’m mainly working on that right now. Always dabbling with other the stories of other characters who pop up in my imagination too, though. I was working on a short story about two best friends a poetry collection as well.

My favorite classic MGs are The Secret Diary of Adrian Mole 13 ¾, the Anne of Green Gables series and Are You There God? It’s Me, Margaret. Recent ones are Everything Sad is Untrue, Inside Out and Back Again, and Front Desk.

Please slow down and enjoy the journey. Yes absolutely and not just to aspiring authors – this one is for everyone!

I love reading cookbooks from around the world and modifying and creating my own nutrient-dense and tasty recipes.

I foster traumatized shelter kittens and it brings me so much joy to do so.

SALMA HUSSAIN grew up in the UAE, and immigrated to Canada when she was thirteen years old. She has a B.A. (Hon.) in English Literature, with a concentration in creative writing from the University of Calgary, a law degree from the University of Calgary, and a Masters in Law from McGill University. Her short stories and poems have appeared in Canadian literary magazines. She lives in Toronto.