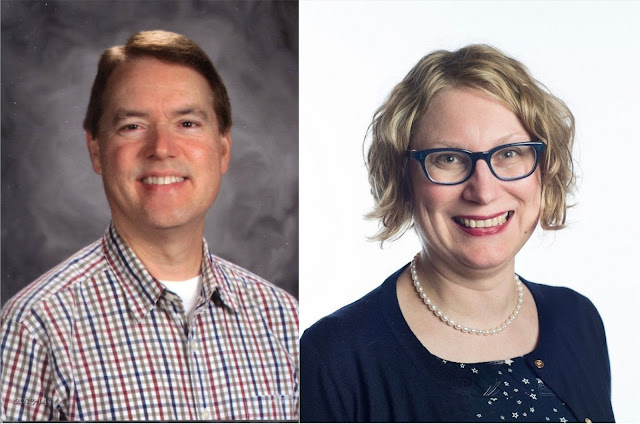 We have a special treat today: a joint author interview with the authors of the picture book, CINDERELLIOT: A SCRUMPTIOUS FAIRYTALE, illustrated by Stephanie Laberis (Running Press Kids), out now! Enter to win a copy! 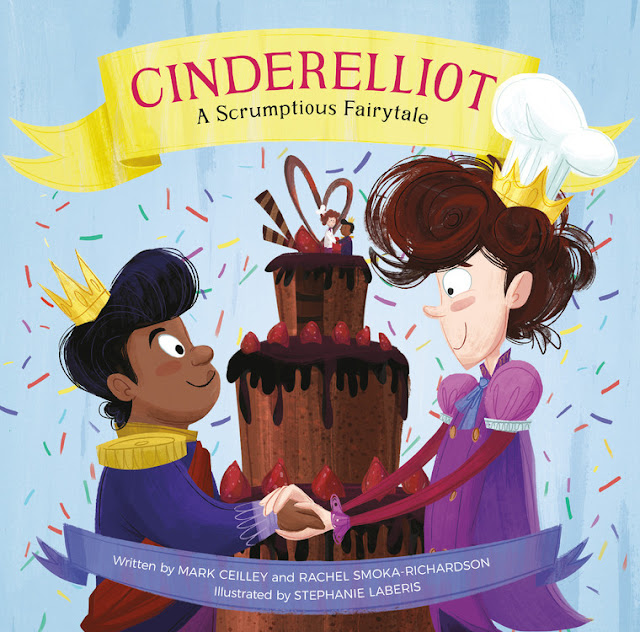 Mark: I think my writing journey started way back in elementary school when I wrote stories and created audio stories with my cousins on a cassette recorder. In third grade, my cousin and I wrote a story and sent it to a publisher.  It was rejected. My love of children’s stories peaked when I took a children’s literature course in college as part of my undergraduate degree in elementary education. Later, when I had my own classroom, I loved reading books every day to my class.

In 2005 I saw an ad for a correspondence course, writing for children with The Institute of Children’s Literature. I took that course and then another one the following year. I joined SCBWI. Also, around this time, I took two children’s writing courses at the Loft Literary Center in Minneapolis. In 2007, I received a letter from Spider Magazine saying they wanted to publish a story I had sent them the previous year.  I was excited to get my first story published and work with an editor.  The story came out in July/Aug 2009 and then reprinted in July/Aug 2020.

I kept writing new stories, participating in two critique groups, and sent stories to publishers.  In 2009, I heard about the Hamline MFA program in Writing for Children and Young Adults program. After studying the program and the requirements needed to get admitted, I decided to apply. I began in January 2010 and graduated two years later. From 2012-2019, I continued writing new stories, and sending them to publishers who would accept unsolicited manuscripts. I have over 250 rejections. There were many times I wanted to give up, but I kept at it because I really wanted to get published. Along the way, I had several stories that editors asked for revisions or took my story to acquisitions. This gave me hope and encouraged me to keep moving forward. Unfortunately, those editors ended up passing on my stories.   It has been a long and winding journey with high and low points. One recent high point was signing with my agent, Emily Keyes at the Keyes Agency earlier this year.

Rachel: I've been reading and writing ever since I can remember, but it wasn't until after I earned my master's degree in arts administration that I really got serious about writing. After a failed attempt at creative nonfiction, I spent NaNoWriMo 2008 writing 25,000 words of a terrible young adult novel, the process of which was hard work filled with joy. I then announced that I was going to be a children's book author - to the surprise of absolutely no one. As my family and friends pointed out, even as an adult I still mostly read children's and young adult books. In 2009 Michelle Obama and Dr. Jill Biden announced a new scholarship for military spouses, which helped me achieve my goal of earning my MFA in writing. It took 10 years after graduation to publish my first picture book. I also have two middle grade mystery novels and a biography published by Capstone Press: Cheer Fears (2022), Track And Field Trick (2022), and Millicent Simmonds: Actor And Activist (2021).

Congratulations, Mark, on your picture book debut, Cinderelliot! Tell us about the story and how you came to collaborate in the writing.

Mark: I came up with the idea after reading the book Prince & Knight which was published in May 2018. This is a picture book about a prince and knight who fall in love and get married. Soon after I read it, I thought about Cinderella and wondered what it would be like to write a gay version. I wrote the first draft in July 2018.

After I wrote the first few drafts of what was originally titled Cinderella (the title was later changed to CINDERELLIOT when it was discovered that there was a 1960 Jerry Lewis movie with the same title. It was thought that readers might get confused with the movie and the book). I sent it to Rachel for feedback as we were friends and had met through volunteering at Minnesota SCBWI conferences. We had given each other feedback on other stories before Cinderelliot.  Rachel gave me feedback and I revised. I sent it back to her and then she suggested the idea of collaborating. I said yes, as I thought it was a great idea.

How did collaborating on writing work?

Mark: The early drafts of Cinderelliot had him competing in a sporting competition. He had two stepbrothers where one hunted and the other swam. Cinderelliot did wood carving. I got stuck on the hunting aspect, as I knew it wouldn’t go over very well in schools.  Rachel came up with the idea to change the sporting theme to a baking competition. We decided early on to change the stepbrothers to one stepsister and one stepbrother. We also needed to think about reframing what Cinderelliot “wanted.”  Ideas were tossed back and forth through a few drafts sent through email. Once we had that first part of the story, his “want,”,then we kept working on drafts from July 2018-Spring 2019.

Along the way, we got a professional critique by author Rob Sanders. (Pride: The Story of Harvey Milk and the Rainbow Flag, Two Grooms on a Cake, and others.)  Rob was very helpful. He encouraged us to use more baking vocabulary, further develop Cinderelliot’ s character and develop some scenes a bit more.

Rachel: Over a year, we passed the manuscript back and forth through email, with periodic phone conversations or coffee meetups. Two very helpful critiques from Rob Sanders helped us really shape the manuscript. I shared a polished draft with my agent (Dawn Frederick of Red Sofa Literary) and she agreed to represent the book.

Mark: I’ve been working on a Halloween/Ghost story. I recently received feedback from my writer’s group and now I need to make another revision. I’ve also been revising some other picture books.

Rachel: I'm in the midst of revising several picture books, a middle grade novel, and a chapter book series - as well as a brain full of ideas.

Mark: My advice would be to read lots of picture books.  Check out stacks of the latest ones from the library and see what is being published today. Join a critique group. Join SCBWI and attend their webinars and conferences. They have many resources and offer many opportunities to learn the craft, hear an editor speak, or get feedback from an editor or agent. I would also encourage others to keep writing stories. Don’t worry if they aren’t perfect. Just keep at it and try and revise and make it the best story you can. Take some children’s writing classes. Learn all you can about the craft. Above all, don’t give up! Be persistent, patient, and professional.

Rachel: For picture book writers, I suggest either reading a craft book or taking a beginner class specifically for picture books. There's an art and form to writing picture books that is similar to writing a sonnet or haiku, and once a writer understands the basic form, the creativity can flow.

Mark: I worked in Walt Disney World for two years soon after I graduated from high school. I worked in Fantasyland in the Magic Kingdom where I worked on such attractions as 20,000 Leagues Under the Sea, Peter Pan’s Flight, and many more. During that time, I was asked by my manager if I would be interested in training new employees on how to run and operate some of the attractions. I readily agreed and enjoyed it very much.

Rachel: I suffer from terrible motion sickness - as much as I love to visit other cities and countries, I dread the actual travel part. Recently my mom found some of the very first books I wrote (in second grade!) including the masterpiece Rachel and the Terrible, Horrible, No Good, Very Bad Day. The plot revolves around how much I hated the road trip that my family took to Michigan. I was happy when we reached the hotel, and relieved when we got home. This still holds true today.

Mark Ceilley earned his MFA in writing for children and young adults from Hamline University. He has taught Pre-K, Kindergarten, First and Second grades. He is currently a reading interventionist.  He and his husband live in St. Paul, Minnesota.

Rachel Smoka-Richardson has an MFA in Writing for Children and Young Adults and a certificate in Picture Book Writing from the Vermont College of Fine Arts. When she’s not writing, Rachel is constantly reading, especially YA and adult contemporary novels. She is an avid crafter and her award-winning crochet and cross stitch items can be found at local fairs. Rachel loves to travel and often goes to New York to see Broadway musicals—but is equally happy watching too much TV with her pilot husband Dan and sweet rescue dogs Charlotte and Hazel at their Minnesota home.