July 22, 2022
We are excited to feature author Rachel Elliott and her debut middle grade graphic novel, THE REAL RILEY MAYES (Balzer + Bray April 2022). Enter to win a copy!
Tell us about yourself and how you came to write and illustrate for children.
Hi! I’m Rachel (she/her) and I am a queer artist, illustrator, and comic-maker. I grew up drawing constantly, and as a teen, made comics for the high school paper. I even made a comic as my college application essay!
I studied studio art and painting at Truman State University in Missouri. My art was very narrative– paintings about people and animals back home in rural Oklahoma. Sometimes my painting professor Garry Gordon would wave that application essay comic at me, and say “Ever think about making comics again?”

It took a dozen years for me to try, but I love making comics. I can tell a story through drawing, the composition is as complex as a painting, and published books have a broad reach. The Real Riley Mayes is in bookstores in NYC as well as my hometown of 8,000 people in Oklahoma. (Winking at you, Pryor Book Exchange!)
Congrats on your debut middle grade graphic novel, The Real Riley Mayes! Tell us about the story.
Thank you! I’m so excited to share it with Kidlit 411!
Riley Mayes is a fifth grade “dude-ish” girl. No one gets her. She’s a class clown whose jokes fall flat. She’s an artist whose humorous revenge drawings get her sent to the principal. Riley thinks one person might get her: famous comedian Joy Powers. Riley wants to write her a letter, but all her attempts are hilariously bad.
Riley reaches out to classmates for help– Aaron, the new kid and aspiring stuntman who chuckles at her jokes, and Cate, an imagineer who invented the cat-governed universe “NYANLAND.” These friendships have potential, and Riley knows it.
But when Riley realizes she doesn’t just admire Joy Powers, she has a CRUSH on her, her new friendships feel more complicated. Why does Cate stay friends with a homophobic mean girl? Why doesn’t Aaron want Riley to talk to his two dads? And why does the library computer censor her questions about gay people?
With some help from her supportive family, and a distant star, Riley figures out how to find answers to all her questions about herself, her friends, and her future as a queer person.
Was your road to publication long and winding, short and sweet, or something in between?
I first sketched Riley in 2015, and it released in 2022… is that long and winding? There were lots of obstacles. Middle grade novels were still kinda new. And I’d never written and revised a complete book before!
Most writing craft advice is about prose. Revising a graphic novel is different, and cheezuss it’s a lot of work! Thankfully my agent, Susan Hawk, is a very observant and patient editorial agent. My editor, Donna Bray, and Art Director, Dana Fritts, are very wise and inventive. They helped me develop a revision process that worked for a hand-drawn graphic novel.
The biggest obstacle was the plot of Riley: a contemporary book featuring crushes. Fifth grade me would have been mortified! You see, when I was a fifth-grader, other girls in my class loved reading books that featured crushes and the onset of puberty. I despised these books. I liked to read Sherlock Holmes or Batman comics or Watership Down. If I got halfway through a decent book, and a crush appeared, I’d throw the book across the room. Of course, this was because I was gay, but I was oblivious. Fortunately for Riley, she is not me. She figures out a way to relate to her crush-conversant classmates.
What projects are you working on now?
I’m juggling a couple different graphic novel proposals. It’s hard to say what will happen, but I’m crossing my fingers that a future book will involve at least two of the following: mysteries, siblings, and/or cats.
What are one or two pieces of advice you'd give for writing and illustrating a middle grade graphic novel?
Be patient with yourself and your process.
You know how, at kidlit events you hear folks say publishing is: “a marathon, not a sprint”? Writing and illustrating a graphic novel is like a TRIATHLON. Just like a triathlon has swimming, cycling, and running- a graphic novel has text, pictures, and carefully-composed layouts with page turns. It doesn’t really feel like writing a book, it feels more like working on a complicated sculpture or machine. Maybe that’s why I love it so much.
Apply for grants.
Graphic novels are very time intensive. If you are like me and have a full time job, it can feel impossible. A generous Artist Enrichment Grant from Kentucky Foundation for Women helped me pay someone else to mow the yard and clean the house so I could spend the evening drawing Riley. Don’t limit yourself to grants specifically for graphic novels- if you explain to the funders how broad your audience is, you’ll be very appealing to all kinds of organizations.
What is one thing most people don't know about you?
Thanks to my grandmother, I can say a handful of words in Cherokee. Not anything you’d use in an actual conversation like “how are you” but weird stuff like “stinky goat butt” or “fast wagon” or “mean white man.” Cherokee words were a big part of growing up in my hometown. Riley's fictional home county is Kenuche, which is a Cherokee food made from hickory nuts or black walnuts.

Where can people find you online?
I’m on Twitter and Instagram as @okie_elliott, and my facebook author page is Rachel Elliott Cartoonist, and my website is rachelelliott.me. On my website’s about page you’ll find a contact form for questions about school visits, comic workshops, or… anything at all! 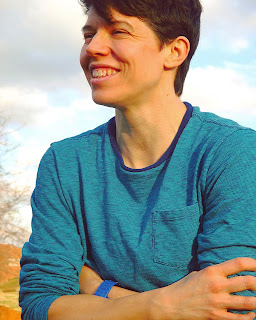 Rachel grew up queer during the 1980s in rural Oklahoma. She’s a big fan of baseball, tacos, cats, and comedians. She teaches first-year composition, multimedia writing, and writing comics at the University of Kentucky, as well as comic and zine workshops for kids and adults. Her debut middle grade graphic novel, THE REAL RILEY MAYES, was released in May of 2022. If you love secret codes, parallel cat universes, and dude-ish girls who act out humorous death scenes, you’ll want to read this book.
a Rafflecopter giveaway
Labels: Author Spotlight Illustrator Spotlight Rachel Elliott