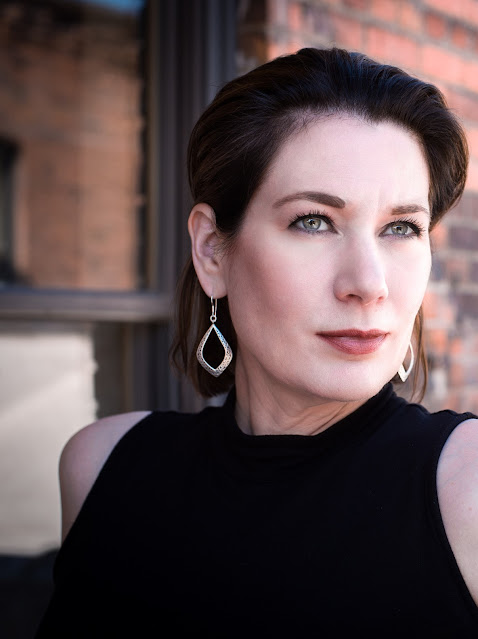 We are excited to feature author Lora Senf and her debut middle grade novel, THE CLACKITY (Atheneum Books for Young Readers, June 2022)  Enter to win a copy below!

Hi! I’m Lora Senf and The Clackity is my debut book. I’ve wanted to be an author as long as I can remember—ever since I knew an author was a thing someone could be.

I’ve always loved scary stories. When I was a kid there were just a few authors writing age-appropriate horror, so most of us who liked the scary stuff went from those books to Stephen King pretty fast (and, in my case, way too young)! I think kids deserve books written for them, and that includes genres like horror. Plus, kids are basically the best audience to write spooky books for—they are braver than adults, in lots of ways smarter than adults, and they’re still wonderfully open to the possibility magic is real. I feel so honored and fortunate to write the books I do for kids.

Congrats on your debut middle-grade novel, The Clackity! Tell us about the story and what inspired you.

The Clackity is an upper-middle-grade horror story. Nearly-13-year-old Evie Von Rathe has one family member left, and her aunt has just been stolen by the ghost of a serial killer, aided by The Clackity, a creature that lives in an abandoned slaughterhouse. Evie and The Clackity strike a deal: she has one day to get through an impossible neighborhood to save her aunt and overcome her anxiety in the process.

The Clackity started as a random text from my sister that just said, “Haunts from Heloise.” Those three words left me gleefully envisioning a sort of otherworldly Dear Abby who would solve paranormal problems in outlandish ways and who had a column in a small-town newspaper. Not long after, I was on a road trip with my family and we stopped in my husband’s hometown of Butte, Montana. There was a building he just had to show me. It turned out to be a rather cool (and I am 100% certain haunted) abandoned abattoir, and it was love at first sight. By the time I finished trespassing and got back in the car, a story was coming together. But it needed a hero.

As long as I can remember, I’ve been deeply anxious. I know now what anxiety is and how to deal with it, but growing up in the 80’s no one talked to children about anxiety, so I was just a weird kid. I thought I was broken. On the outside I was brave, and willing to do stupid things to prove it. But truth was, I was afraid of everything EXCEPT scary books and movies and tv. Those were the places I practiced being brave. I wrote Evie, the main character of The Clackity for scared but brave kids (and those of us who used to be those kids) who deserve to see themselves as heroes.

Something in between, I suppose.

My agent, Ali Herring, signed me in 2019 for a truly weird manuscript that is now gathering dust in the proverbial trunk (someday I’ll get back to it—maybe). Ali was working on edits for that one when I said, “Oh, hey. Wait! I think I wrote a thing.” I sent her an early draft of The Clackity and before I knew it, we were both committed to seeing Evie’s story become a real book. We went on submission in early 2020 and, fortunately, we found a wonderful editor, Julia McCarthy, who saw what we saw in The Clackity. The book just came out on June 28th of so, all told, it was about three and a half years from signing with my agent to publication of my debut.

I’m thrilled to share that The Clackity is now officially the first book of the Blight Harbor Novels. The sequel, The Lighthouse Keeper, is sitting with my editor right now and we’ll be working on that in the coming months. Then I have the third book to write. Then…who knows? I definitely have other stories I want to tell.

My favorite classic MGs are the books of John Bellairs. Bellairs (with the help of illustrations by Edward Gorey) introduced me to horror. I read The House with a Clock in its Walls and it was all over—I was hooked. Another favorite is Neil Gaiman’s Coraline which turned 20 just a few days ago. Not sure it that makes it a classic or not? Either way, both Coraline and Bellairs’ books were important to me as a reader and as a writer.

As for recent books and authors, I’m really loving the work of Ally Malinenko and Dan Poblocki. They are very different writers, but they are both putting out some really great spooky MG.

I just finished the snarky and heart-filled fantasy Grounded for All Eternity by Darcy Marks and am now reading Stories to Keep You Alive Despite Vampires by Ben Acker. Acker’s book is funny and spooky and seriously delightful.

Basically, if it’s middle-grade horror (or horror-adjacent) I want to get my grabby hands on it.

What are one or two pieces of advice you'd give for writing middle-grade horror?

I don’t know if this is advice as much as its opinion. I believe kids deserve to have books written for them in all genres—yes, even horror. Otherwise, they’re going to do what so many of us did growing up and jump right to Stephen King and other adult genre writers a little (or a lot) earlier than they probably should. The thing is, when we write in a genre like horror for young readers, I believe we authors are also entering into an unwritten contract with kids (and their grownups). The deal goes something like this: “I’m asking you to trust me to take you on an adventure. It’s going to be fun and spooky—sometimes downright scary—but if you stick with me, I promise you everything is going to be okay in the end.” And we have to keep that promise or our readers are never going to trust us to take them on another journey.

Along with being an author, my other dream career is to be a storm chaser. There’s not much I love more than weather when it’s doing really interesting things. I haven’t quite figured out how to turn this fantasy into reality, but I’ve also not quite given up on it.

Lora Senf is a writer of dark and twisty stories for all ages. She credits her love of words to her parents and to the public library that was walking distance from her childhood home. Lora finds inspiration for her writing in her children’s retellings of their dreams, on road trips through Montana, and most recently in an abandoned abattoir. She is a member of SCBWI, Horror Writers Association, and the Pacific Northwest Writers Association. She lives in Washington State with her husband, their twins, and two remarkably lazy cats. The Clackity is her first novel.