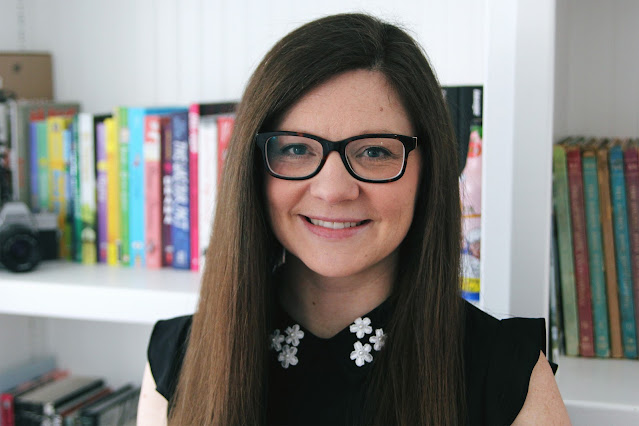 We are excited to feature author Misty Wilson and her debut graphic novel, PLAY LIKE A GIRL, illustrated by David Wilson (Balzer + Bray) out on September 27, 2022.

My name is Misty Wilson, author of Play Like a Girl, a middle grade graphic memoir about when I played football on the boys’ team in seventh grade. I consider myself a lifelong learner, and I love to try new things. In fact, I’ve been to college several times. My first degree is in hospitality management, my second is in nursing, my third is early childhood education. In the time I spent getting my MAT and then later getting my reading endorsement, I took several classes revolving around kidlit, and absolutely loved them. But even then—even when I wrote my own picture book for a class—I’d never considered being an author.

It wasn’t until my third year teaching (fourth graders that year) that I discovered Raina Telgemeier’s Smile and saw how much kids loved graphic novels. That year, a seed was planted. Then the following year, teaching third grade in a new district with kids who were absolutely obsessed with graphic novels, I finally read a bunch of them (and I’d already read indie comics for years prior). That same year, around that time, I had a student who was staying in for recess because she didn’t feel like she fit in with anyone. That’s when it really occurred to me that I could maybe write a book. I went to my husband, who’s an illustrator, and said, “I think I have a story to tell. What if I write it and you draw it?” He was immediately in. 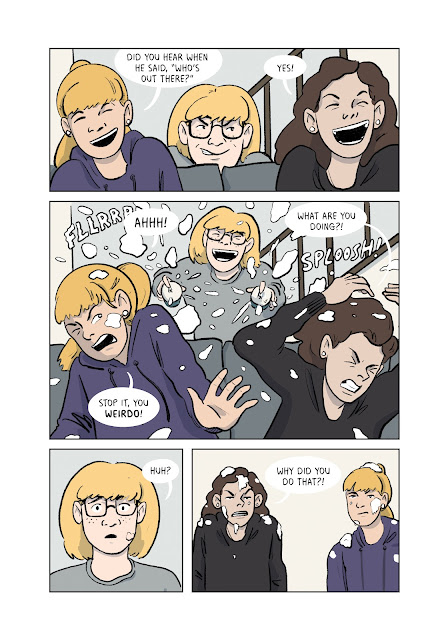 Congrats on your debut MG graphic novel, Play Like a Girl! Tell us about the story and what inspired you.

Play Like a Girl is the story of my seventh grade experience playing football on the boys’ team. But while it is the story of a girl persevering in a male-dominated sport, it’s also about figuring out who you are and staying true to that, even when it’s hard. It’s about toxic friendships, friendship break ups, and forming new bonds with people maybe you never saw yourself being friends with. It covers so much of the yucky stuff that occurs in middle school because so much of it is universal. When I had students in *third grade* worried about being popular and crying about not fitting in, I knew I wanted to share my own experience because I’d been there, too. I wanted kids to see that when they’re going through a rough time, they’re not alone. So many of us experience heartbreak and loss of friends and immense changes as we grow up. 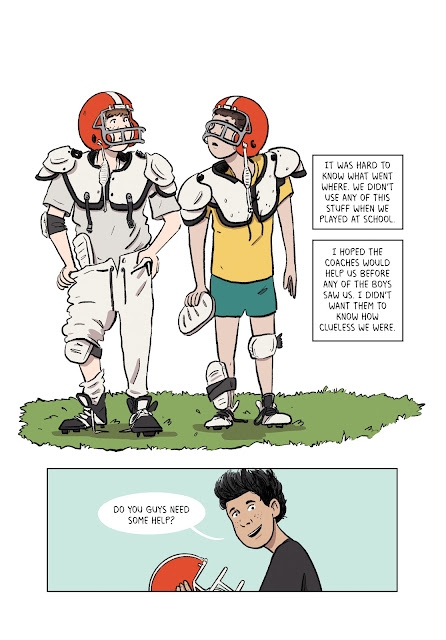 Most people would define my experience as short and sweet, and in many ways, it was. Once I ran the idea of creating a graphic memoir past my husband, everything moved extremely quickly for us. I’d spent a few months simply thinking about seventh grade and jotting down some notes, but not writing anything. Then over winter break during the 2019 school year, I typed up a one page synopsis and my husband (David) did 5-10 samples pages—this is all David had said he’d needed for indie comic pitches, and most agents at the time didn’t specify what they wanted for graphic novels. I wrote a query, and we started sending everything out before the new year.

Responses began filtering in the next day—some passes, some requests. Almost immediately someone asked for a script. We didn’t have one. So we got a babysitter for our kids and spent the day and late into the wee hours of the night writing a script so we could send it *the next day.* Then another agent passed but told us we needed a four-ish page outline for a graphic novel. So, I added more details to my one-pager. Then, finally, we got two R&Rs, and both agents wanted more than we’d originally sent (luckily, we had a script ready now).

Throughout January, one of the R&Rs passed, and I was back and forth with the other one, doing revisions, and I was still sending out full requests and new queries. Finally, in early February, I had an offer of representation on the table, which led to another offer, which ultimately led to an offer from the agent who’d asked for an R&R. After all three phone calls, I signed with my agent, Daniel Lazar at Writers House—the one I’d been working with for a month already. The book had truly become what it was at that point because of his notes. He’d been doing a ton of work with me despite not being my agent. Once I signed in February, we did a tiny bit more revising and David completed more pages of art. We went on sub in March, and within two weeks were at auction. My experience was extremely fast and extremely unusual. I was very, very lucky, but it also required A LOT of hustle while teaching full time, a lot of extremely late nights, and a lot of scrambling to learn stuff I knew nothing about.

What are some of your favorite classic MGs graphic novels? Recent ones?

I’m not sure there are many MG graphic novels that can be considered “classic” because the GN boom is still so relatively recent, but some older favorites are El Deafo by Cece Bell (2014), Roller Girl by Victoria Jamieson (2015), and Be Prepared by Vera Brosgol (2018). Some of my newer favorites are Twins by Varian Johnson, Snapdragon by Kat Leyh, When Stars Are Scattered by Victoria Jamieson and Omar Mohamed, and Swim Team by Johnnie Christmas

I’m currently working on my second book in my two-book deal, another middle-grade graphic novel. This time, it will be fiction, though much of the main character’s life is based on my own childhood. I’m not sure how much I’m allowed to say at this point, but it’s a story about a boy and a girl who grew up together and used to be best friends before having a falling out, and after ending up in detention together, they find their way back to being friends, learning there’s more to people than meets the eye.

I’m also working on a contemporary YA project with my agent.

Read lots of graphic novels and study them (what’s said versus what’s shown in the art, transitions, voice). If you’re a writer but not an artist: be flexible and communicate well and often, if you’re an artist: practice sequential art and character design.

After I got my second degree (in nursing), I put off getting a nursing job and instead taught myself how to code websites. Soon after, David got a freelance job doing photography and graphic design in New Zealand, and I got to tag along to code the company’s website.

Also, I sucked my thumb until I was eleven years old.

Misty Wilson, author of the middle-grade graphic memoir Play Like a Girl, teaches by day and writes by night. She is a voracious reader, and she loves binge-watching television shows. She lives in Ohio with her husband, David Wilson, illustrator of Play Like a Girl, and their two daughters. Learn more at www.mistywilsonwrites.com.