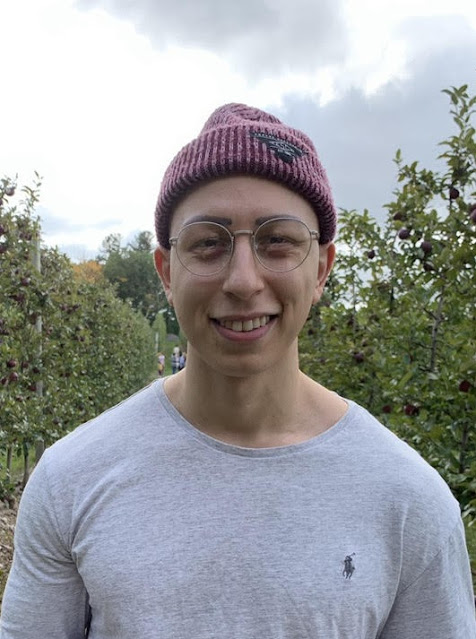 We're excited to feature author George Jreije and his debut middle-grade novel, SHAD HADID AND THE ALCHEMISTS OF ALEXANDRIA (HarperCollins) coming in October 4, 2022. Enter to win a copy!

I'm a Lebanese-American author obsessed with storytelling in all forms, from books to movies to video games. I began writing for children after graduating college when I decided that writing was something I really enjoyed. While experimenting with my writing, I found getting into the head of a younger character felt much more natural to me (especially telling fart jokes), so I stuck with it and don't ever want to go back!

Congrats on your debut middle-grade novel, Shad Hadid and the Alchemists of Alexandria! Tell us about the book and what inspired you.

This fantasy novel centers on a 12-year-old Arab-American immigrant. Shad doesn't have much and misses home, so when he learns he comes from a long line of alchemists, he's determined to learn the ancient art as a means of connecting to his family heritage. The story was inspired by the way so many people who come from diverse backgrounds, like myself, crave the connection to their ancestral cultures. It was also inspired by my Arab background, and I wanted to create a magic system based on that culture while being wholly unique. That was the birth of alchemy!

I would say my road to publication was solidly average. I wrote several novels that will never be published but were important to me in discovering my voice. It was then, after about four years of writing, that I wrote my debut novel. I was lucky enough to get mentored by a couple of talented authors, who helped me revise that novel, which attracted a couple of agent offers, and subsequently, a couple of publisher offers too!

I have some secret projects I can't yet talk about but am VERY excited to share with the world soon. I will only say two words: graphic novels.

What are some of your favorite classic middle-grade books? Recent ones?

If I'm being honest, I didn't read a lot of middle grade growing up, so I never took an interest in "the classics". However, I'm obsessed with middle grade now and have a long list of recommendations. Anything by Adrianna Cuevas, Sarah Kapit, Christina Soontorvant is great from the regular novel space, but I would encourage everyone to look into middle grade graphic novels like The Magic Fish or New Kid.

I would tell my younger self to start writing sooner! I waited until I was a college graduate, which was ironically when I had the least amount of free time up to that point. My advice is to be as patient as possible and trust the process. If you constantly show up, get feedback, and revise, it is a matter of WHEN and not IF you get published.

One thing most don't know is that I have alopecia, which means that hair doesn't really grow on my body!

George is the Lebanese-American author of SHAD HADID AND THE ALCHEMISTS OF ALEXANDRIA, a forthcoming children's fantasy novel with HarperCollins. He has also written short stories published in collaboration with UNICEF. When not writing, George enjoys trying tasty Arabic pastries, messing with new yoga poses, and mentoring other writers.