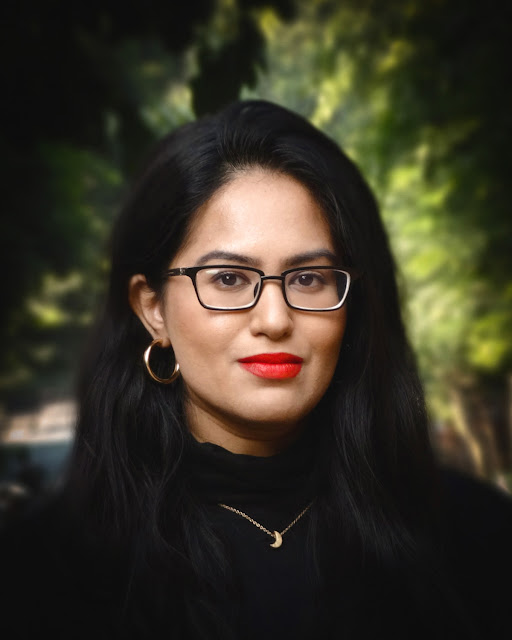 We are excited to feature author Tanvi Berwah and her debut young adult novel, MONSTERS BORN AND MADE (Sourcebooks Fire), out now.

I’m a writer based in India and I’ve been writing since I was a singe-digit-age kid. But I started to write original novels with the intent to publish when I was in my late teens. So, as a teen, it was quite natural to write for teens. Over the years, I tried other categories, but at heart I know my voice suits a YA story the best.

My life also did not have a “normal” trajectory that we socially expect and so even though I have physically aged out of being a young adult, the tangle of emotions as we come of age has followed me still and is very new in my head and when I write stories, they tend to come out as YA.

Congrats on your debut young adult novel, Monsters Born and Made! Tell us about the book and what inspired you.

Thank you! Monsters Born and Made is a dystopian fantasy set in a harsh oceanic world where 16-year-old Koral hunts and captures vicious sea beasts for a deadly chariot race tournament called the Glory Race.

The first idea of this book was an image of an island surrounded by stormy seas. As an ocean lover, it was immediately intriguing to me. There’s also a Hindu myth about emerald green horses that live at the bottom of the Indian Ocean, and that was a super cool idea, which I twisted into the beasts from the sea.

Koral’s character, too, came almost instantly after. She has gone through different interpretations but still remains very much like she first came to me. Her story, her defiant nature, is what makes this book.

Oh, it was definitely a long and winding process of ten years. Drafting and querying and revisions, I’ve been through it with multiple books and each time it was equally frustrating and demoralizing. Rejections, by nature, tend to feel personal even if now I know they’re not.

Persevering through it was only possible because I couldn’t see myself not writing. Without this one thing, I wouldn’t know what else to do with my life, it was all very existential lol.

Even when I went on submission to editors finally, the pandemic hit. And that really stumped me because how could I come so far only to find myself in such an unexpected, unprecedented spot? So, basically, I’ve learned resilience through these ten years.

At the moment, I’m directing all my energy toward my second book which is set in the same world and continues the story of the Islands of Ophir. But I’m also tinkering with projects outside of my contracts and I’m excited to see what comes out of them!

What are your top one or two tips for worldbuilding in fantasy?

Worldbuilding has always been my favorite thing about fantasy books. My favorite way to make a world feel lived-in is to have universal lore, whether in the form of its fictional history or fairy tales. It doesn’t need to be written in the text itself (unless it makes sense to have it), but a story’s world takes on a life of its own if you have this reference in mind. It becomes, so to speak, real. Social customs and people’s mannerisms become easier to come up with, as well, because our pasts define our present society to a large extent. What we value, what we don’t, and how that manifests in social situations.

Physical settings and details can always be added or deleted or modified later but, for me, having a previous lore makes a “world” much more believable for ourselves as we write.

What advice would you give to your younger self? is this the same you'd give to aspiring authors?

I would want my younger self to not be afraid of the future so much, as difficult as it has been for her.

In a broader sense, I would want my younger self and all aspiring authors to believe in their own talent and in perseverance. It’s so trite to keep hearing this over and over again, but it’s the one single truth in this industry. And I also want to acknowledge that persevering is a privilege that not all of us are able to hold on to, but taking a break when necessary doesn’t change anything about anyone’s talent so take things at your own pace.

So I talk a lot and can get super chatty, and I love people in general! But I’m also an intensely private person. It’s all very juxtaposed.

My website, tanviberwah.com, has the most updated information and links to all the social media I use. Personally, I’m most available on Twitter and Instagram: @tanviberwah.

Tanvi Berwah is a South Asian writer who grew up wanting to touch the stars and reach back in time. She has a Master’s degree in English Literature from the University of Delhi. Her debut YA novel, MONSTERS BORN AND MADE, is out from Sourcebooks Fire on September 6, 2022. Find her at tanviberwah.com.