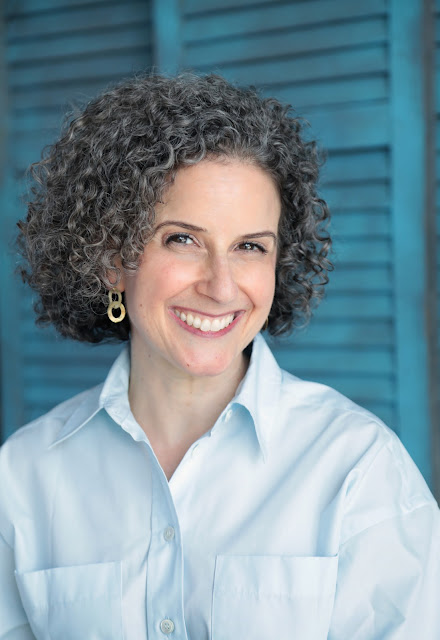 We are pleased to feature author Meira Drazin and her debut middle grade novel, HONEY AND ME (Scholastic 2022), out now.  Enter to win a copy!

When I was in college I took several creative writing classes. My teachers encouraged me, and my classmates’ feedback was generally validating. But after college I never thought about writing fiction again, certainly not as a career choice. In my head, it would have been the ultimate hubris to have declared I wanted to be an author, not least to myself, never mind how ridiculous I would have felt saying it to anyone else! I didn’t know anyone from my extended community who was an author, for sure not of mainstream published books.

But more than that, I didn’t think I could write about the world I knew best, the Modern Orthodox community I came from: it felt  too “different.” But because my Jewishness took up so much space in my life— even when I made friends outside the community and explaining kosher dietary laws or why I couldn’t come out to a party on a Friday night had become my norm—creating a setting that didn’t involve it left my stories and characters inexplicably empty.

Fast forward fifteen years when I had young children. I had been writing professionally in communications positions and as a freelance journalist, but after reading many, many picture books, like many parents, I had an idea for my own. I took a stab at writing it and I could tell the result was awful, but I had no idea how to make it better.

Eventually I discovered a picture book writing class and signed up, determined to fix the PB I had written. Well, I never touched it again, it was too awful to fix, but the fiction bug took ahold of me once again. And my teacher, Jacqui Hann — saw something in my early writing that made me feel I should keep going. Another student in that class told me about a YA novel writing class and I decided to take it, thinking I would learn how to write a novel, because like all those many others, I had found out just how hard writing a picture book is with a beginning, middle and end, that was funny and clever in less than 600 words. And that conversely maybe writing a novel would be easier :)

Unfortunately or fortunately, I didn’t know that the class was a workshop and that most of the students were bringing novels they’d already written to workshop them. But each week you could submit fifteen pages for feedback, and I had a spark of an idea, and my kids still went to bed by 7 pm each night and my husband was already working in London, and by the middle of August when it was time to move across the pond, I had written twelve fifteen-page interconnected stories about two 11-year-old girls with a semblance of a narrative arc, and that was the first draft of Honey and Me.

Congrats on your debut middle grade novel, Honey and Me! Tell us about the story and what inspired you.

Thank you! When I was growing up, the closest I came to seeing in children’s literature something vaguely familiar to my Modern Orthodox Jewish life was in the All-of-a-Kind Family series by Sydney Taylor, which take place in the early 1900s, almost a century before my own childhood! Mostly, the only religious Jews I saw were in the Holocaust books I read over and over again. Although I am the granddaughter of four Holocaust survivors, thankfully my life in 1980s Toronto could not have been more different.

I strongly support the need for children’s Holocaust literature, and these books were a personal key to me understanding what my grandparents had gone through but never spoke about. But, looking back, I see how hard it was to read over and over again about my people being victimized. Even today, most of the mainstream books featuring religious Jews show them in the past, or as victims of persecution. I think I am only starting to understand the full psychological impact of this for myself, but it started revealing itself in one way for sure when I first started writing stories for children. I copied the way other authors wrote: I sent my characters to regular public schools, not a Jewish day school; I had them dress up for Halloween, not Purim. Basically, I still believed the world I knew best wasn’t legitimate enough to write about.

During that time though, I was starting to read to my eldest daughter some of my own childhood favorites—Ballet Shoes, Anne of Green Gables, tons of Judy Blume, all the Ramona books, and All-of-a-Kind Family—as well as some new ones I was just discovering, like The Penderwicks, and later, The Vanderbeekers of 141st Street. To me, what connects these books are writers who understand the magnitude of the small dramas of everyday life. I especially love how the All-of-a-Kind Family books focus on the small dramas in everyday Jewish life. I wondered if I could do that too, but in a modern way and with contemporary characters.

Soon after, an image flashed in my mind of two girls on a school bus, best friends. I knew one came from a big family, was spunky and sporty, not shy although sometimes put-upon by her family. The other—who I knew right away would be the narrator and main character—was quieter and more reflective. She thought her friend had more to offer, but in fact their friendship was evenly balanced, each one supporting and filling in the other. Most importantly, I knew they came from Modern Orthodox families and went to a Jewish school as I did, and my own children do now.

The result, Honey and Me, is a contemporary realistic coming-of-age story about an 11-year-old girl going through sixth grade in the shadow of her fearless best best. Milla envies Honey’s confidence, her charm, and her big chaotic, loving family—especially when they provide a welcome escape from Milla’s small family and their silent house. The two friends do everything and go everywhere together. So when Honey joins Milla’s school for sixth grade, why is it not as great as Milla expected? Will she ever find the courage to step out of Honey's shadow and into her own spotlight?

It has been just over ten years from when I wrote the first draft of Honey and Me to its publication: definitely a long and winding road to publication!

I have a few projects at various stages of draft that I am excited to get back to work on, but at the same time Honey and Me was such a long journey that I am trying to be very in-the-moment with it right now, very present to all the excitement of it coming out and working on publicizing it, getting ready for school visits and any other speaking opportunities, and just trying to enjoy and feel grateful for this dream come true.

Did you have an inspiration board, or music playlist, for this novel? If so, can you share it/them?

Sure! I am the kind of person that can’t concentrate unless there’s some background noise, like the hubbub of a cafe or the kind of music that focuses me into a tunnel but doesn’t take me out of the tunnel because I know the words and end up singing along. With Honey and Me I basically listened to a Mozart for Morning Coffee CD I had from my kids until eventually technology advanced but I was still slogging away and I switched to Mozart for Studying playlists on Spotify. I don’t actually know anything about classical music, but when I hear the opening bars of Sonata for Piano and Violin in G, K.301:2. Allegro my mind jumps to Honey and Milla and their world.

In terms of something visual for inspiration, at one point during the big re-write that landed me an agent, I scoured the internet for images of girls that seemed to fit my idea of Milla and Honey; not just what they looked like but what kind of expressions they might make, and how they might be seen by the outside world. I found one for each girl that was perfect and saved them in my files, although I didn’t really refer to them too much afterward.

I also must use this opportunity to give a shout out to Shamar Knight-Justice, whose rendering of Milla and Honey for the book cover is just so perfect, it’s like he climbed inside my imagination and it feels like this gorgeous, artistic and painterly cover is forever linked to how I think of them and the book. Thank you Shamar!

I write more about this here (https://faberacademy.com/meira-drazin-my-road-to-publication/) but in my experience the advice you hear about needing your agent to believe in you and your work couldn’t be more true. Better to have the agent that you are artistically simpatico with, who exactly gets what you’re trying to do (and hopefully has ideas, editorial ones included, about how to best achieve this) – and LOVES it – even if it takes a little longer to find them.

My other best pieces of advice are to:

Read widely in your genre, but also read outside your genre.

Believe in your characters and your story so that you’re ok to make editorial changes without feeling like you’re sacrificing something integral. And so that you can weather the inevitable setbacks and rejections in your road to publication and have the perseverance to carry on.

Make friends with other authors.

For inspiration, craft and making writing friends, I am a big fan of writing courses and workshops and if possible attending a conference like those from SCBWI. In general SCBWI has been integral to my journey to becoming a published author.

I love to knit and crochet and always need to have a project (or two, or three) going on :)

Meira Drazin is a prolific freelance writer who has published dozens of articles about parenting and topics of Jewish interest. Honey and Me―her debut novel―won the Sydney Taylor Manuscript Award, given by the Association of Jewish Libraries to an unpublished fiction manuscript with appeal to Jewish and non-Jewish readers. Meira grew up in Toronto, built an adult life in New York, and now lives in London with her husband and their four children. Learn more at meiradrazin.com.