The Weekly 411 gathers all the links added to Kidlit411 each week. To receive this post by email, sign up for our email updates. Are you on Facebook? Join our Kidlit411 group for conversations and camaraderie. This week's illustration is by Carolyn Le.

We are excited to feature author Alli Brydon and her picture book, Bright Winter Night, illustrated by Ashley Lindsay (Amazon Publishing), out on Dec. 1! Enter to win a copy! 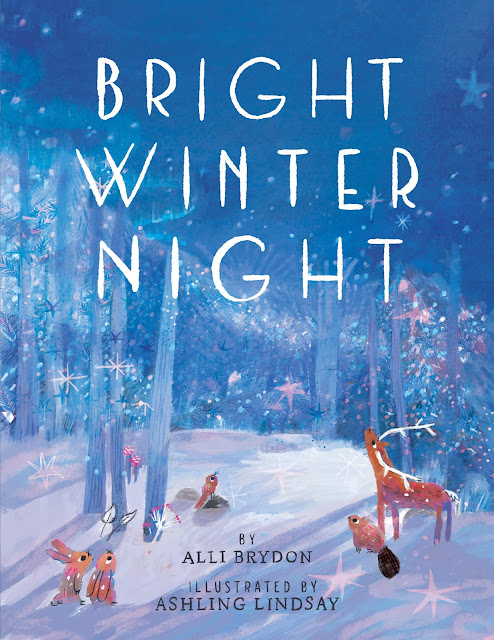 We are excited to feature author Sathya Achia and her young adult novel, IN MY HANDS (Ravens and Roses Publishing LLC, August 8, 2022) Enter to win a signed copy, sticker, bookplate, and bookmark!

We are pleased to host a giveaway of the middle grade novel, Daybreak on Raven Island, by Fleur Bradley (Viking 2022). Enter to win a copy via the Rafflecopter below!

About the Book: From the critically acclaimed author of Midnight at the Barclay Hotel comes a thrilling new middle grade mystery novel inspired by Alcatraz Prison.
Tori, Marvin, and Noah would rather be anywhere else than on the seventh grade class field trip to Raven Island prison. Tori would rather be on the soccer field, but her bad grades have benched her until further notice; Marvin would rather be at the first day of a film festival with his best friend, Kevin; and Noah isn't looking forward to having to make small talk with his classmates at this new school.
But when the three of them stumble upon a dead body in the woods, miss the last ferry back home, and then have to spend the night on Raven Island, they find that they need each other now more than ever. They must work together to uncover a killer, outrun a motley ghost-hunting crew, and expose the age-old secrets of the island all before daybreak.
About the Author: Fleur Bradley is the author of the (scary) middle-grade mystery Daybreak on Raven Island, and award-winning mystery Midnight at the Barclay Hotel (Viking/Penguin Random House). Her story The Perfect Alibi appeared in Mystery Writers of America’s middle-grade anthology Super Puzzletastic Mysteries, edited by Chris Grabenstein (HarperCollins). Fleur regularly does school and virtual visits, as well as librarian and educator conference talks on reaching reluctant readers. Originally from the Netherlands, she now lives in Colorado Springs with her husband and two daughters, and entirely too many rescue animals.

We are also excited to feature a giveaway of the middle grade novel, The Rabbit's Gift, by Jessica Vitalis (Greenwillow/Harper Collins 2022). Enter to win a copy via the Rafflecopter below!

About the Book: The Rabbit’s Gift is a vivid and inventive novel inspired by French folklore set in a country in which babies are grown in cabbage-like plants called Chou . . . and delivered by rabbits. Fleurine, a twelve-year-old aspiring botanist and daughter of the Grand Lumière, secretly tries to grow the elusive purple carrots that humans trade for Chou. She longs for a sibling, but Maman doesn’t want another child. What’s more, she believes science will upset the natural order and insists that Fleurine follow in her political footsteps. Meanwhile, the human demand for babies has dropped, and the rabbits are starving. A runt named Quincy decides to take matters into his own paws and sets out for the city, determined to prove that you don’t have to be big to be a hero. When he inadvertently leads Fleurine back to the top-secret Warren, he sets off a string of events that pits them against each other and jeopardizes the future of the entire country––for rabbits and humans alike.

About the Author: JESSICA VITALIS is a Columbia MBA-wielding writer on a mission to write entertaining and thought-provoking literature. She founded Magic in the Middle, a series of free monthly recorded book talks, to help educators introduce young readers to new fantasy books. She was recently named a 2021 Canada Council of the Arts Grant Recipient and featured on CBCs Here and Now. Her first novel, The Wolf’s Curse, published in 2021, and a standalone companion novel, The Rabbit’s Gift, came out on October 25, 2022.

Mentor Text Referral: Extended Metaphor with A Poem Grows Inside You

Is Your Book Any Good?